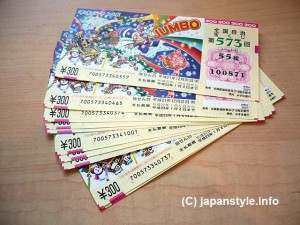 Because salaries have decreased due to the recent recession, people might get more interest in lotteries today.

There are various lotteries in Japan but the most exciting ones are, Dream Jumbo, Summer Jumbo and Nennmatsu (year-end) Jumbo Takarakuji, of which winnings are grand.

The lottery days are in June, August, and on December 31st.

The following char is this year’s Nennmatsu (year-end) Jumbo Prizes.

The “Cheerfully 2010 Prize” means “win the prize and be cheerful next year!”

The single lottery ticket is 300 yen (approx. US$3), and multiple tickets can be bought consecutively or randomly.

Every time when the Jumbo lotteries start to be sold, long lines of customers are seen at lottery booths in all parts of the country.

In Tokyo, a lottery booth in Ginza is famous for the line.

Many people come to this booth all the way from distant towns by train.

When I see the line on a news show, I feel the end of the year.

I think some people buy lottery tickets with friends and share the prize but most people buy for him/her own.

I wish I win at least 7th prize…

Well, if there is a chance, I’ll introduce other lotteries on JAPAN Style!

Let me know about a lottery in your country!