It seems many Japanese children will get Beyblade from Santa Claus this year.

It is a spinning top manufactured by TAKARA. The toy sold over 160 millions in the world.

There are anime series and manga of Beyblade in early 2000’s and the toy became mega hit.

In 2008, Takara released Metal Fight Beyblade, and anime series of the same name started in April 2009.

Since then, it has been popular again.

Beyblade is a modern version of Japanese top toy called beigoma, therefore, it excites adult who have played beigoma in their childhoods.

At major toy stores, they sometimes have Beyblade competitions, and it’s often seen that fathers get excited more than children do.

The inexpensiveness of the toy is another reason of the popularity. 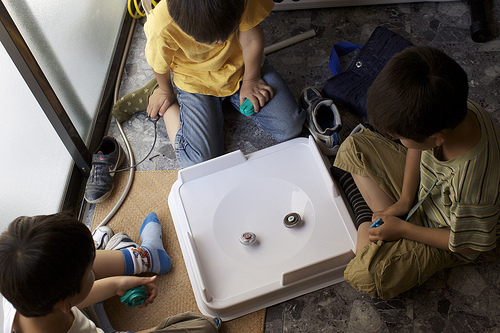