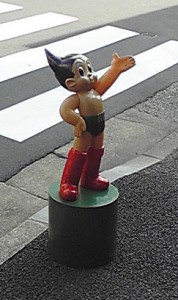 in Tokyo. Photo by Atsu.

It is titled “ASTRO BOY” in English.

Since then, Atom has been one of the most famous characters in Japan.

Now it’s about to be famous in all over the world.

The film will be released in 58 countries.

Imagi Animation Studio, who produced the film, worked on with Makoto Tezuka who is a Japanese film and anime director and also Osamu’s son.

For the past two years, they worked together to figure out how to keep the spirit of the original Atom works.

Here is an interview with Makoto Tezuka by Nikkei Newspaper (Nikkei Shinbun).

——On August 19th, Makoto Tezuka was invited to Imagi Studio in LA to see a preview of ASTRO BOY.

Makoto says “Imagi Studio invited us to show it first and foremost. I felt their respect to the creator.”

Original Atom is an elementary schoolchild but in the film, he is an early teenager.

“The biggest advantage of making film in Hollywood is that the film is going to be seen by worldwide audiences. I accepted any changes to accomplish that.”

The production wanted to target audiences over teenagers; therefore, the age of Atom was set older in the film.

What Makoto insisted about the character design is that Atom has to be “kawaii” but “kawaii” is not well understood with the English words, “cute” or “lovely.”

“Since ancient Japan, the Japanese admire small things and that is originated from animism.” Makoto explains.

Original Atom features eye lashes; however, in the western culture, drawing eye lashes on a boy character is not acceptable as he looks girl-like.

As a middle course, the upper eye-lids were drawn thicker.

In the story creation, they considered both Japan and the West values.

The film describes Atom’s life since he was born till he finds the place where he is accepted.

Atom was created by a scientist who lost his young son but the scientist gets disappointed at Atom because he doesn’t grow up, so he kicked Atom out of his house.

Makoto asked the production to not describe Atom as a runaway boy.

“In Japan, as soon as he left his father, he gets considered as a bad boy.”

“Osamu Tezuka always said that manga and anime are like Esperanto.”

ASTRO BOY will proof that anime can move worldwide people beyond the walls of languages and cultures.———

The film will be released on October 10th in Japan, October 23rd in America.