As I announced before, I had a round table discussion with people from overseas and live in Japan on Saturday, June 5, at my office.

I planned this discussion for a Japanese company which makes iron accessories such as necklaces, pendants and straps made of the same iron ware as “iron tea pot” (which you may know).

The craftsman wanted to hear foreign people’s impressions on his work, so I invited some people from different countries.

About 10 people from America, Sweden, Slovakia, China, Indonesia and Japan discussed about the iron accessories. 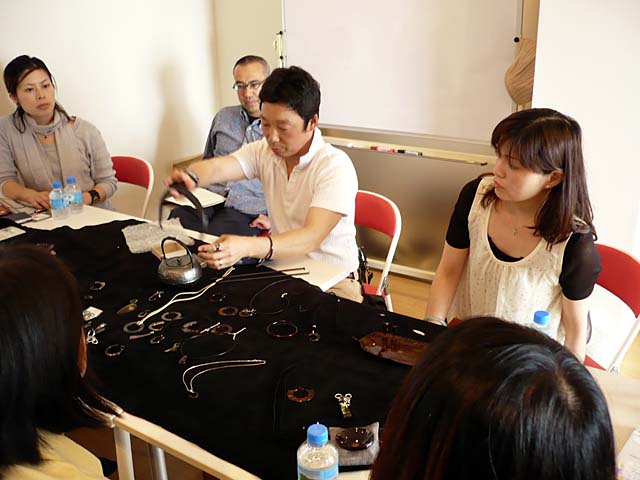 Spreading the iron works, we discussed the impressions.

The discussion through an interpreter was lively and very worthwhile.

What I was especially interested in was the opinion that some people decide to purchase by the first impression rather than the history or concept.

The Japanese like to explain how their products are excellent, but the opinion convinced me that a visual beauty of a product wins over its concept.

Actually, the foreign participants made a good reaction to the work that the Japanese didn’t expect it to be liked so much.

So I think it was worth hearing various opinions.

The discussion finished and it was time to enjoy lunch ♪ 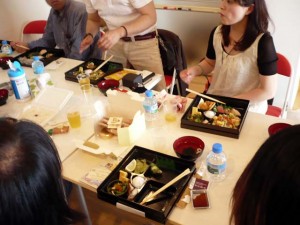 We had sushi bento!
Except for one who couldn’t eat fish, I got another bento for her though (^_^))

Because I was so busy shooting video, taking pictures and broadcasting on Ustream, I didn’t have time to eat the sushi bento (cry)!

Lastly, I had the participants fill out questionnaires and we dissolved. 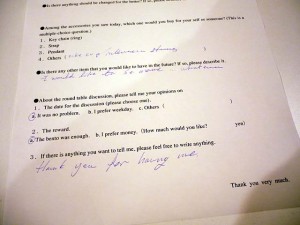 I was so exhausted but I really enjoyed it, so if there is another chance, I would like to have a discussion like this.

If you are a seller from foreign country and want to know how the Japanese think of your products or services, I will plan a round table discussion.