I started a new project, “My Work” last year (please see for the last article) in our site. This is a section to introduce the interviews in which people who I became acquainted or interested in talk about their work.

Our work takes most of our time or even most of our life. I believe we can grasp one’s outlook on life thorough his/her view of work. I hoped to set this section one day as I am interested in learning what people’s views on life.

I hope, although irregular, this series will feature messages which dwell in your heart.

I would like to introduce my friend, Mr. Isao Tokuhashi, for the 2nd time in this series.

It was about 2 years ago when I encountered Mr. Tokuhashi. I joined an event and it was him who was hosting the event.

I was soon attracted to his speech, his knowledge as well as his experience and joined several other events which he organized since then. Sometimes I asked for his advice on my business and by now he has become one of my treasured friends.

Here is the brief profile of Mr. Tokuhashi which shows he has worked throughout in the media industry. Especially his career in the TV world is long and he engaged in producing mainly news reports, variety, music shows and, some other program propaganda videos. In the meanwhile, he also experienced an internship and had a job in the US. He interned at the local TV company in California and worked for a Japanese TV station in Los Angeles. Afterwards, he produced news reports for the NHK satellite channel and international channel, and then he started “My Eyes Tokyo” to which he addresses himself at the moment.

Currently, with his experience abroad and good command of languages, he is engaged in a broad range of activities such as multicultural exchange events, MC in international exchange events held in various locations, and further, the media management of the above mentioned, “My Eyes Tokyo”.

Here is the Q&A style interview with Mr. Tokuhashi:

Q1. Please introduce the purpose of “My Eyes Tokyo”.

It was a main motivator that I felt that “Americans do not know Japan” when I was work on an internship in a provincial town in the US. I was sharing a house with 4 American university students at that time and, to my great surprise, their questions to me were, “Do you speak Chinese?”, “Which colours does the Japanese traffic light have?”, “The number of bikers is more than that of pedestrians in Tokyo, right?”.

Many of Toyotas, Nissans, or Hondas were going by outside, appliances by Sony or Panasonic are lined up at home and kids were playing with the Nintendo. However the Americans did not know anything that Japan built all those. I wondered about the gaps and was urged by a desire to fill them, in other words, to show them “the real Japan”. However, I was not familiar to the Japanese traditional or sub cultures so decided to show “Japan conceived outside” instead, that is, to show Japan described by the foreigners living in Japan. The idea to gather many “eyes”, rather than to represent a couple of cases, to introduce Japan unbiased in its true light, hit me and began interviewing the foreigners living in Japan. 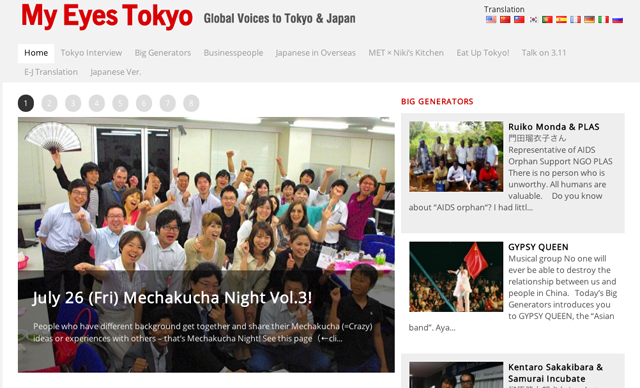 I chose “those living in Japan” but not “those visiting Japan” because I thought the travelers who were staying only for a short period would have said only “positive aspects of Japan”. Whilst, those living in Japan for over a certain period are open to say negative side of Japan and I will bring you up on that too in My Eyes Tokyo. I believe it is far more plausible when “their reasons to keep living in Japan despite all the negativities” is conveyed than the interviews full of nice comments.

From now on, I am planning to share the interview opportunities which I had exclusively so far. They will not be the events to officially interview various people but chances to experience “the joy to spend the time together and get to know the person in front of you”. I am currently in the middle of discussion how to make a system to achieve such a goal with my partners.

Q2. What do you give the most attention to in your work?

That is my relationship of mutual trust with people. Taking my interview as an example, I do not write something which differs from what interviewees meant. I always ask them to check my draft in order to avoid it. When organizing an event, I make sure that all who have been involved gets benefit from it. Needless to say, I would like them to enjoy themselves during the event but would also like them to be satisfied with their pay. I pay not only the fee for the actual MC, for instance, but also a transportation fee if he/she has come from all the way from far. This may not be surprising but, in some cases, is done just roughly. And also I try hard to do my best when requested to pull in audiences for an event.

Q3. What is your view on Japan today?

I am more concerned about the future than the current situation.

We are now facing the social problems with the lower birth rate and the aging of local people. When we are aged in around 20 years we will be on the verge of the circumstances where babies who were just born or are about to be born today will say that they are burdened because of us.

That is the very reason why I feel the need to leave something to the younger generation before too late. What I would like to challenge is to “stimulate Japan by the empowerment with the foreign factors”. For instance, to try to let foreigners join a working environment where engaged only by Japanese. This should make some kind of reaction and cause changes in mindset. The famous Silicon Valley was the very place where an innovation after another was developed with such a help of “extraneous stimuli”. Steve Jobs had a Syrian origin. However nobody disrespected him for his origin. Mr. Masayoshi Son is probably a similar figure in Japan. I wish to see one day soon that Japanese people too will have learnt to respect ones’ skills and ideas regardless of where they come from.

Q4. Please tell us about your future dream (aim).

I would like to build my own happy family. This may sound like a joke but is not (!)

I do have a desire to get married. But it was unrealistic to me as I was unsettled and travelling a lot. When my mother became ill some years ago and I took care of her, I realized, “I should not be alone. No one will look out for me if I get sick”.

A president of a company is replaceable but fathers, mothers and children are not. When I realized this, I felt an intense longing to be one and only for somebody else.

I have here talked my plans for the Japan’s future so far but if I have to choose only one of those, I would choose this dream. I would like to leave something to my own child and to make myself to be able to do so at the end of the day.

Thank you very much, Mr. Tokuhashi.

I see him as “a man of leverage”. Many of us can have full of ideas and plans but it is not so easy to take actions. It is actually rare to meet a person who has both.

I view that he takes actions for his belief, and people who share his belief gather together around him and support him. His activities have been gradually expanding and, as a result, his influence has gained power.

As mentioned at the beginning, based on my common belief with Mr. Tokuhashi, I set up a joint collaboration with his “My Eyes Tokyo” in our Japan Style.

To be precise, this is a project which Japan Style appropriates and reprints the last articles of My Eyes Tokyo (interview articles). I believe that it matches to introduce the efforts which My Eyes Tokyo deployed so far with the principle of Japan Style which is to “send out messages of Japan to the world!” and it hopefully is beneficial to our readers abroad.

We aim to start the project in the month of August. Don’t miss it!  😉 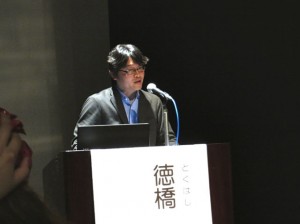