The topic is “pupil”, and he started with the story that he heard from a Japanese woman who had lived in Egypt.

She told him that one day when she admired an Egyptian woman’s blouse, the woman gave the blouse to her.

It was not kindness but the reason was because the Egyptian people believe “evil eye”.

Shimizu explained “what they believe is that when people envy you, their eyes have power to bring bad luck.”

So, this Egyptian woman thought “my blouse was admired. It’s enviable and it will bring bad luck.” 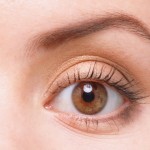 In Egypt, it’s taboo to praise others’ children.

If a child was praised by someone, the parents worried about that their child might get hurt or something.

So, the parents tell each other “your child is not lovable”, and they even name their child such name as “beggar” or “dust-cloth”.

This custom is not limited in Egypt but seen in overall in Islam world.

For example, many of their houses are gorgeous inside and simple outside to not be envied by others.

Now, what is the origin of “evil eye”?

The commonly believed opinion is reflection in eyes.

If you look into someone’s eyes, your own small image will appear in the pupil.

“Pupil” in Kanji also consists of “eye” and “child” (see the figure).

“Early people saw their images in others eyes and must have felt strange and feared thinking they were taken into eyes. That’s how the belief that eyes have power to bring misfortune was born.”

In ancient Egypt, they put make up around their eyes to remove the power of eyes, so did King Tut whose mask was wearing black mascara.

In the middle age, not only those people who have unpleasant look in their eyes but also those who have big eyes were assumed to have evil eyes and condemned to the stake.

Shimizu concluded the article saying you can ‘t praise other children if you ever go to Egypt, but it’s one of human cultures.