[One Year On: Japan after Quake] Something We Can Share with the World – Part 1

Today, I would like to share a story about 3.11 from my friend Riku Santosa. (>>This is his pen name. He is Japanese.) Last year he actually visited Miyagi prefecture as a volunteer worker and witnessed the real situation there. From this experience, he wrote a story titled “Disaster prevention knowledge that Japan can share with the world” for us.

Disaster Prevention Knowledge That Japan Can Share to the World

One year has passed since March 11, 2011. That day, people all over the world watched continuously broadcast ‘Breaking News’ on TV, or live streaming video on the internet. The news showed the gigantic tsunami reaching the coastline. “What is happening?” “Is this real?”

Now I’m writing to you from Dhaka, Bangladesh. It’s been 112 years since the last big earthquake here. However, a huge active‐fault line exists from the Bay of Bengal to deep inland under the ground, and two big rivers divide the country into three parts like sandbanks. Dhaka city, far from the sea, is built upon a layer of weak sand stratum. It is easy to imagine that if a big earthquake were to occur, it would bring immense damage or hardship to this poor county. According to the estimates of the Bangladesh Ministry of Disaster Prevention, if a M-7.5 quake hit Dhaka city, over 70% of buildings in the city would be leveled.

Bangladesh is also located on the Indian Ocean cyclone corridor, and Japan has provided emergency aid to this country three times in the past.

After the 3.11 disaster, the words from Bangladeshi people were always thoughtful; “Sorry about the tsunami”, “Are your family OK?”. The people who have been in Japan before asked me “How are the people living in the place I have visited before”, or “It was a huge quake. Where were you at that time?”

Japan has received emergency aid from Bangladesh last March. The total amount of monetary aid and relief goods sent from Bangladesh to Japan was ¥150,000,000 (US$1,819,400). The population of Bangladesh is 160,000,000, so it is easy to say that each citizen donated ¥1(US$0.012). But think of this; the GNI (Gross National Income) of Bangladesh is US$520/person (2008). 41.3% of the whole population lead their lives with less than US$1 of income per day. The value of ¥1 for them might be very different than from our perspective. No amount of money is a small sum in Bangladesh.

This month here in Bangladesh, a 3.11 photo exhibition was held by the Japanese Embassy, and welcomed about 850 visitors per day. The purpose of the exhibition was to show Japan’s appreciation for the financial support and relief goods from the people of Bangladesh, and for the help provided by Bangladeshi communities in Japan.

Also in this country, people’s interest in Japanese techniques for earthquake‐resistant construction, quake-absorbing structures, and seismic reinforcing work are recently growing. The government actually announced a project to reinforce important/valuable buildings and high-rise apartments in Dhaka by using Japanese seismic reinforcing techniques. On March 8 in a Dhaka hotel, a study seminar for the project was held, and a lot of media reported it. At the seminar, seismologists shared an experiment showing how a 1/100 building model shakes with the reproduced vibrations basing on the pulse wavelength of the Great Hanshin Earthquake (Jan 17, 1995). And they also showed data indicating that buildings fracture in different ways according to their shapes and ages. 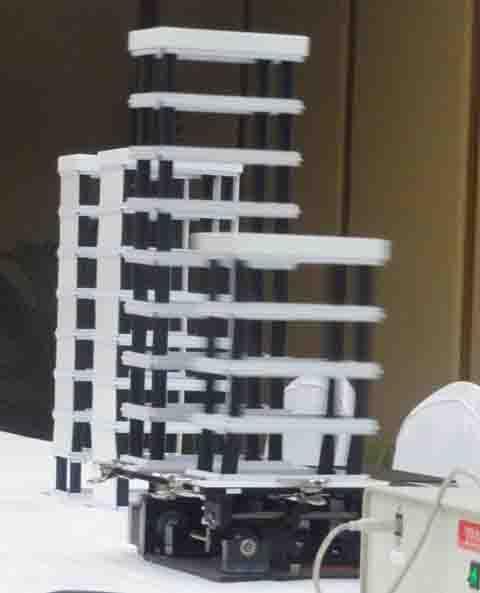 1/100 building model for the experiment 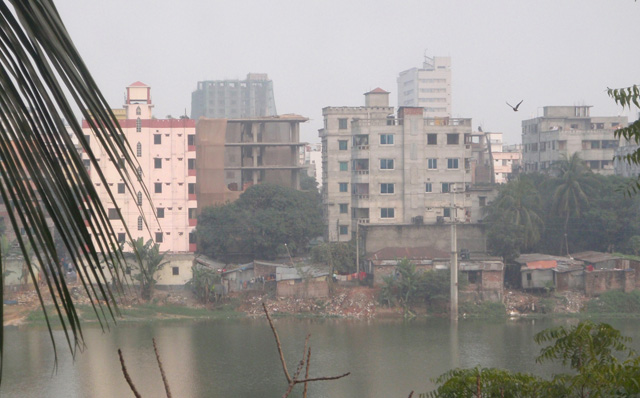 Dhaka suffers from chronic traffic congestion and extreme population density. If a big earthquake were to occur, the loss of life would be staggering due to disintegrating buildings, fires, and blocked evacuation routes. It would be a humanitarian disaster. 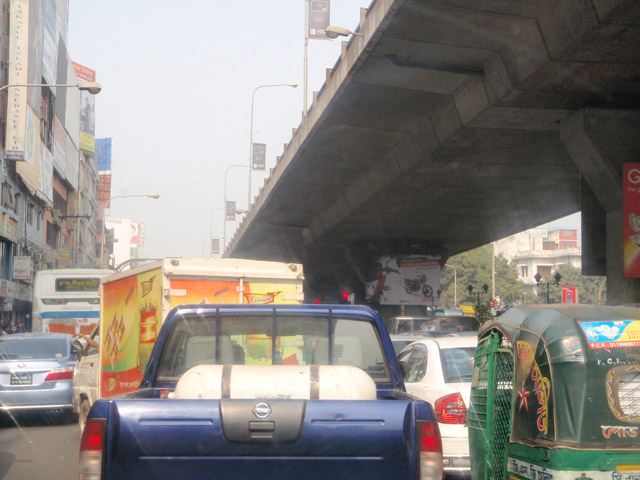 What’s more, the geological features beneath and around the Bay of Bengal are very similar to those of Tokyo Bay. These features would make a terrible tsunami concentrate into one point and surge over the bay. (This is what Tokyo is concerned about). For Bangladesh, the disaster which unfolded in Japan was a case of ‘Today you, tomorrow me’.

People in this small south Asian country have learned a lot of things about agricultural and IT techniques from Japan. And now Bangladesh has begun learning about disaster prevention systems from Japan’s experiences.