“Wasabi Stories” is a quotation and summary of a column which touches ones heart or not found on the internet.

It is a Japanese famous person’s story extracted from the NIKKEI news paper.

The purpose in posting the column in JAPAN Style is to cheer you up and to make you feel “it’ was worth reading!”

Wasabi (Japanese horseradish or mustard) is spicy and stimulate your nose and make you teary.

The columns in “Wasabi Stories” hopefully spice your heart and sometimes make you teary!

The stories were originally sent as E-mail Newsletter in Japanese. Some are a little old but we’ll eventually catch up with new ones.

It’s been 40 years since Anmanpan was born and still it’s popular among Japanese young Children.

Anpanman is well known as anime series, but it was originally children books.

When Yanase was about 60 years old, he started wanting to write children’s books of Anpanman that he had been writing as magazine comics.

The idea was from his war experience, and these beliefs were engraved on his heart.

“Whatever the reason is, we shouldn’t war. It’s important for the true hero to save starving people before anything.”

After brooding over a character who saves poverty people, he reached Anpanman because Anpan (a sweet bun filled with red bean paste) is a popular sweet snack, and its cute round shape is perfect for the character. 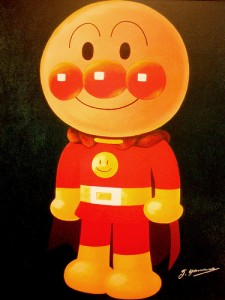 The hero Anpanman’s face is made of anpan, so he gives his face to starving people but when his face is eaten or get wet, he gets weak.

Besides, he doesn’t have exceptional power like other superhero from the beginning.

Yanase says “even though he is a righteous hero, he is not strong at all because he gets weak when his face is eaten, but I thought, a righteous hero has to expect to get hurt.”

This is how Anpanman became children’s books but people’s reactions were unfavorable.

“Bread flying in the sky? Don’t write such trifling story for children.”

“These are not the books for libraries”

While those adults’ criticisms, in fact, Yanase himself thought “It’s not going to be well received by today’s children.”

Opposite to his thought, Anpanman got popular, and more characters were born one after another.

You can see how popular it got in the children’s books, the TV anime series, the films and the related goods.