Following to Naruto, I want to write about another favorite Japanese manga, like, “SLAM DUNK”.

It’s a teenage drama about high school basket ball team, and written by Takehiko Inoue, one of the most famous manga artists in Japan.

Let me show you the scene that struck me. 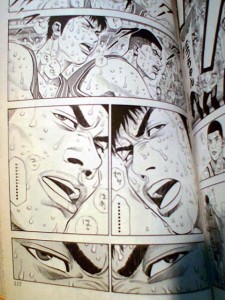 Look at their eyes.

They are exhausted and almost swaying during a game but showing a lot of guts to win.

Because I used to play basketball in my high school years, I identified myself with the characters.

I think no one can depict those eyes unless he or she actually experiences the enthusiasm in a basketball game.

In fact, I found that Inoue himself plays basketball too.

Another Inoue’s hit manga is “Vagabond” on the fictionalized accounts by Eiji Yoshikawa of the samurai [W:Miyamoto Musashi] (1584 – 1645).

The other day when I went to the Museum of Contemporary Art Tokyo, a huge ink painting created by Inoue was exhibited.

The 3-meter long painting astonished me! 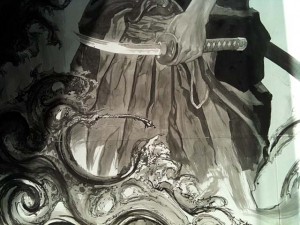 I thought “it must have taken a long time to paint this”, and also felt glad that I could see Inoue’s work so close.

Lastly, I want to share his word he said on a TV show.

“Characters don’t get improved unless the writer gets improved.”