How to Rail Travel with a Few Dollars in Tokyo Area

Traveling in Japan is expensive, but there is a way to travel 7 prefectures by train only with a 130 yen (US$1.70) ticket! It involves the Japan Railways’ “Metropolis Section Special Rule,” which allows a passenger who has a ticket between two stations to take different lines in the section regardless of the route that is indicated on the ticket.

For example, if you are at Station A and bought a ticket to Station B, instead of heading for Station B directly, you can take a train to go to the  Station C and go through Station D, E, F, G, H, I, J, K, and get off at Station B.

Although you can’t get out of stations, you can enjoy different scenery and local dishes in the trains. In the Tokyo section, the trains go by building clusters, rice paddies, tea plantations, mountain areas, and rivers.

In large station like Tokyo Station, there are stores and delicious eateries in the station yards, and even small stations have the stand-up noodle shops. Or you can buy a famous “ekiben (station bento)” to eat in a train. 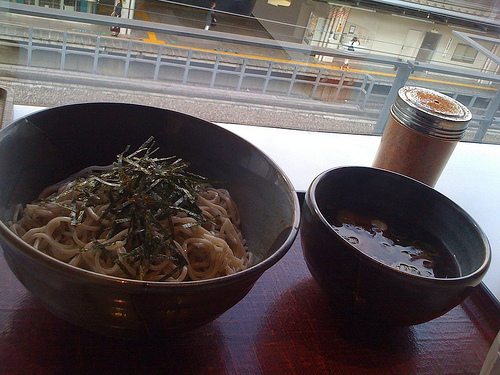 This YouTube user took 1035.4km roundabout trip between Kitakogane Station and Mabashi Station, which is actually 2.9km apart. He only paid 130 yen for the ticket (the lowest price to travel between the two stations). This is the video of his railroad trip.

Another traveler, he started at Nishitachikawa Station and traveled 498.1km to get Tachikawa Station (the next station). It took him 14 hours 33minutes by 17 trains. If he paid the all tickets, it would cost 7,980 yen (US$104) but again, he only paid 130 yen for the ticket.

You can see his pictures HERE.

Remember, there are “3 Basic Rules” for the detour trip.

1. Don’t pass the same station or go the same section more than once.

3. No stopover permitted. (You can’t get out of the gates unless you pay for the tickets to get there.)

It is really complicated but it is most inexpensive way to travel around Tokyo (in the trains). If you want to try, I recommend you to print out the section map (link below) and plan really well (because if you fail or has to leave a station, you might end up paying thousands of yen for the tickets).