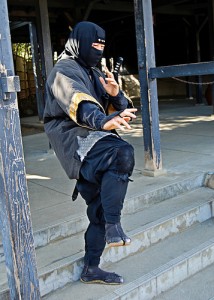 Ninja was a Japanese spy and assassin, also called shinobi (meaning “steal away”).

The history of Ninja dates back to 6th century.

They especially flourished in the Warring States period, which is 15th century to the beginning of the 17th century, when daimyo (Japanese feudal lords) or shogun wanted others’ information to beat them.

The art of Ninja is called Ninjutsu in Japanese.

You might have heard of the word in manga or anime (ex. NARUTO).

Besides training of martial arts or sneak-in techniques, they learned pharmacy to make poisons or cure.

Do you know why?

Because Ninja has to disguise as a townee to get information in a town.