“Enjoying your life is more advantageous”

“Whether you worry or not, the result will be the same. Enjoying your life is more advantageous.”

Whenever he is asked for a calligraphy autograph, he writes so. 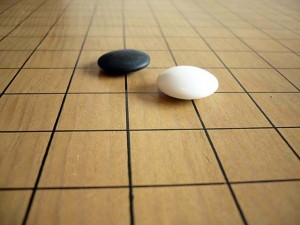 While Being a 58 year-old Go expert, he is called and also calls himself as a pleasure-loving person.

Not so long ago, he published a book named “Isshokenmei Fumajime (Don’t Be Serious as Hard as Possible)” in which he tells his view of life.

“Losing your self-possession is more dangerous than crisis itself.”

“Being envious of someone means you give up yourself.”

When he was young, he studied Go single-mindedly out of sheer desire to be a strong Go player, and aimed to be a number-one player; although, now he feels that he wants to enjoy playing Go by leaving things to chance.

As it is already mentioned, he puts importance on enjoying life, and that is why he even wants three or four his bodies.

As a hobby, he started social dancing three years ago, and when he is off from playing Go, he often goes to the lesson.

He said that dancing activates and clears his head so that it gives good effect on his Go playing.

Takemiya’s story made me feel that a dream just doesn’t end as a dream.