[One Year On: Japan after Quake] Something We Can Share with the World – Part 2

In struggling with the aftermath of the tragic disaster, Japan has become wiser and more conscious about disaster measures that can be shared with other earthquake-prone nations around the world.

When the big quake occurred, most people tried to confirm their families and friends’ safety on their mobile phones. Telephone lines quickly became overloaded because too many calls were being made at the same time. However, internet communication tools such as Facebook and Twitter worked well. On my Facebook timeline, I saw a lot of posts from my friends telling of their safety and asking about the situations of other places.

A while after 3.11 my friends’ company ordered all employees to establish a Facebook account for emergency situations. And now in Japan, the Facebook Disaster Message Board had been introduced. On this board, a notification appears when a disaster happens, and you can let people know you are safe (or not) by simply clicking a button. Providing or receiving this confirmation helps to avoid panicky feelings all around, and helps people to act calmly and wisely even under emergency situations. (http://news.livedoor.com/article/detail/6316409/)

Regarding radiation issues, people got kind of panicked at the beginning. The hysteria has subsided, but the radiation fears among people still remains. Now many people use water dispensers for safe water, and some people still care very much about the origin of vegetables or other food when they do their grocery shopping. And recently I’ve just heard the sad news that a preschool rejected the admission children from Fukushima, simply due to radiation paranoia. On the other hand, I read the news that Nagano prefecture has begun a new teacher training program dealing with radiation issues. Teachers can learn how to teach their students proper knowledge about radiation, and proper ways to cope with radioactive disasters. (http://www.chunichi.co.jp/article/nagano/20120302/CK2012030202000122.html)

Also, Japan is developing new technology to cope with radiation issues. Here is the news about the technology which can remove 99.9 % of radioactive cesium in soil. For more detail >> CLICK HERE.

Another serious problem is the employment issue. Lots of people lost their jobs because of the disaster. Most are eligible for unemployment insurance support from the Japanese government, but the expiration date for each applicant would come sequentially. The total number of recipients is approximately 60,000. Taking the next step of employment measures is an urgent need. According to Nikkei News, to stimulate employment, many companies based in Hokkaido have opened branches in Tohoku. (http://www.rise-tohoku.jp/?p=725)

After 3.11, Japan has put renewed focus on developing various kinds of emergency items and ideas. Let me introduce some.

Helmets are very helpful in protecting your head when a quake strikes, but at the same time they require a fair amount of storage space. This foldable helmet, ‘Tatamet”, can be folded up very thin, and can be unfolded and put over your head in one second if needed. 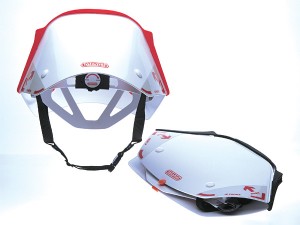 I personally think this is very interesting. A small Japanese company called Cosmo Power has developed a floating fiberglass capsule shelter that looks like a mini Noah’s Ark. I’m not sure where to store this, but it might be a good idea to have some to save our own lives. Cosmo Power seem to already have hundreds of orders for ‘Noah’.

It was an unimaginable tragedy. Japan is moving toward normalcy, but now many victims need support to ease their pains. I heard some news that the number of mental care specialists in the stricken areas is not enough to meet the demand. It might take many years for some people to get their real normal life back, but some interesting ways to heal their hearts are reported.

As the only national library in Japan, the National Diet Library (NDL) is archiving a wide variety of local government information from the disaster-affected areas. And now they’ve begun collecting other digital materials such as videos taken by victims and blog articles posted on the internet. The purpose is to concentrate those precious records into one place, preserve them indefinitely, and provide these artifacts to the next generation so that the lessons and human experiences not fade away…

As I prepare this 3.11 article series, I review this horrible disaster and grope for ways we Japanese can make use of our experiences. The more I collect information from the internet and newspapers, and listen to stories from some people, the more I realize it is somewhat awkward for me to work on this kind of round-up article series.

I had consciously placed a distance from the 3.11 matters. I was in Tokyo on March 11 last year, and knew the horrible situation of Tohoku through various media. Maybe I could visit the disaster stricken areas and work as a volunteer worker. Or I could work on something to help the Tohoku victims from Tokyo. But I didn’t do anything. The reason was that the situation looked desperately sad. The dreadful scenes were introduced everyday. One day I read a story about a sushi restaurant owner evacuating from Fukushima to another place. He was discriminated against only because he was from Fukushima, and he couldn’t even find a job. His bank kept being demanding payment of the loan for his sushi restaurant in Fukushima. Even when he said that there was no more money, the answer from the bank was this; “you can make money if you work at the nuclear plant for decontamination.” It was true that he could make good money from decontamination work, but he had to fight with invisible radiation fears instead. This 50+ year-old sushi restaurant owner got sick because of the painful life. After a while he could find the light at the end of the tunnel and planned to reopen his restaurant.

When volunteer workers go to stricken areas and see victims, they need to be brave and mentally strong enough to face such tragic situations. And I was not strong-minded enough, and consciously looked away from the facts.

On the other hand, I thought my mission was to write articles of how Japan overcomes this tragedy and recovers.. That also means showing Japan’s appreciation to the other countries who have given us a lot of support. That’s why I started the corner “Japan after Quake” on my Japan Style blog. Please do watch closely the facts shared by various media, and do consider how you can make good use of Japan’s experiences. Sorry for a rambling talk, but this is where I reach my conclusion

Last I would like to share a photo gallery of 3.11 named “MEMORY: Things We Shouldn’t Forget”. It is difficult to introduce all photos here. But please do click the links listed below and see the photos with English annotations.