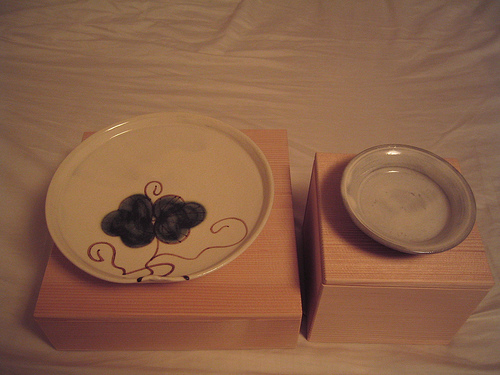 Karatsu ware is pottery produced in and around Karatsu, Saga Prefecture, and has been rising in fame as tea utensils.

The characteristics of Karatsu are the earthy, tight texture and the rustic images (such as flowers and birds) simply painted on the surfaces.

Karatsu ware was started in 1590s, when potters from the Korean Peninsula brought the technique. At that time, they mainly made tableware but gradually began to make utensils for the tea ceremony. Karatsu was representative of the pottery in west Japan; since old times it was said “Seto in east and Karatsu in west.”

The traditional Karatsu techniques are using kick-wheel and tataki-zukuri which means smoothing off the surface with a slab.

It is said “Karatsu ware gets mellow as being well-used,” meaning the freshly made Karatsu ware is still imperfect, but it gets closer to perfect as it gets used more for a long time.