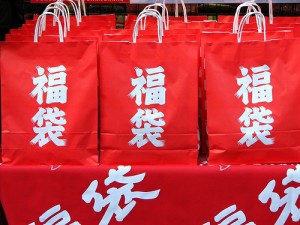 The main feature of Japanese New Year’s sale is fukubukuro, which means “lucky bag”, and it’s filled with unknown random contents and sold at discount price (usually more than 50 % off the original price).

To get lucky bags, people wait outside of stores before they open.

The lines are so long that the stores hand out numbered tickets to those in the lines for the customers to make purchases on a first come, first serve basis.

This video was taken two years ago, when there were 5,000 people made the line.

Ginza area in Tokyo is famous as the most heated fukubukuro sales battle field, and the battles are often seen on TV.

If stores sell the same lucky bags every year, they can’t attract customers, so they come up with various ideas to make different ones from other stores.

One of he most unique fukubukuro series is “Konkatsu Fukubukuro (Marriage Hunting Lucky Bag)”!!!

Each bag has a dress that the woman can wear when she meets her boyfriend’s parents.

Besides clothing, a free ticket to dating spot and an “ema (a votive picture tablet of a horse)” are in the bag to support women for marriage hunting.

There are all kinds of marriage hunting lucky bags this year; another one has kitchen tools for women to impress men with home made dishes.

I know they are wired… I feel the same way LOL!