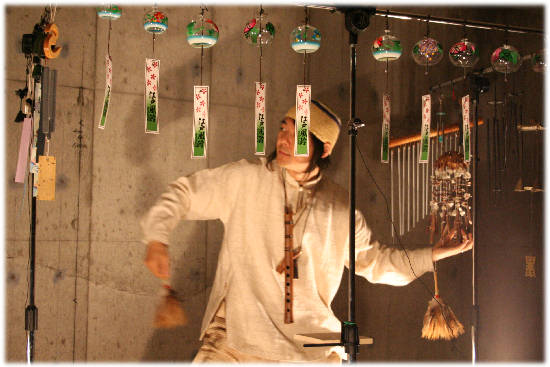 If don’t, please read the previous japanstyle article about furin.

It’s a traditional wind bell that tinkles when wind blows.

Strangely, the sound eases the heat, so it’s known as a summer thing in Japan.

Today, since air conditioners take the place of furin, we don’t hear the sounds so often like back in old days; however, there is a furin performer who plays the furin as musical instulments.

His name is YOSHIDA Shin and his stage name is “Kazaoto (wind sound)”.

While he holds concerts at his furin house in Kanagawa, he performs in various places in the country.

His activity has been featured on TV shows and newspapers.

Mr. Yoshida always liked music; he started composing music since he was in junior high school.

He used to play piano and synthesizer but he was thinking “something is missing in the sounds”.

One day, he went to a concert and when he listened to a sound of a bell, he thought “this is it!” by intuition.

Since then, he has released many CDs as a furin musician.

The listeners of his performance in the youtube video say,

“It empties my mind.”

The tunes including Amazing Grace are relaxing too♪

Mr. Yoshida says furin makes “healing sounds” which can be enjoyed all year round.

“Not only in Japan, but will people in the world be pleased with the sound of furin.”

His dreams are, performs furin in all over the world, playing the furin with an orchestra, and having a New Year’s Eve concert on TV.

How did you like the furin performance? Isn’t it beautiful?

His CDs are available on his website, please visit it!

It’s in Japanese, but please feel free to ask questions through JAPANstyle.