The world first studio type capsule condo was designed and built by [W:Kisho Kurokawa] in 1972.

It looks like stacked toy blocks, very playful and fun.

In a 10 square meters room, there are a small bathroom, built in storages and electrical appliances.

If you have seen the American movie “The Fifth Element”, it’s like the room Bruce Willis character lives.

The location of the building is another attraction.

A shipping town Ginza and the Japan’s biggest fish market Tsukiji are in walking distance, and Tokyo station is only 1.5 km away, so many residents use their capsule as a second house. 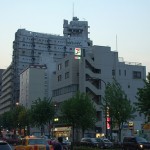 This building was named New Sky Building but because of its warship like design, it has been called “Gunkan Mansion” meaning “Warship Condo” since it was built in 1970.

The designer of this building, Yoji Watanabe was in a Japanese navy, and he used his former “office” which is a warship, to design this unique condo.

The small square windows and the torpedo like water tank on the top make the building look like a ship at a glance.

The interior wall is silver as well as exterior wall, and it looks like a future scene in a 70’s movie.