A Japanese apron, maekake was originally made to worn over kimono.

Today, it is often seen that liquor retailers wear them.

It’s simply a rectangular cloth with straps on it.

It’s commonly navy blue or black and a store name and slogans are written. 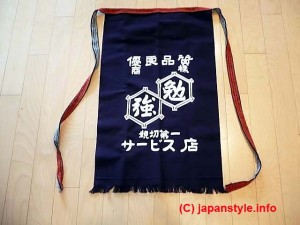 This one shown in the picture is a example of a retailer maekake. 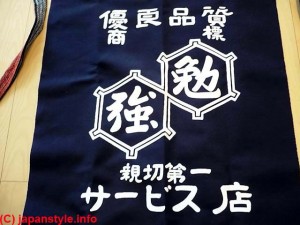 The word in the middle 2 hexagons says “We’ll discount”.

The word literally means “study” but in the business, it means “We make effort to discount”.

The 4 small kanji under the hexagons says “Kindness first”.

The last one says “service store”.

Because maekake has retro Japan feeling, it seems to catch some foreigners’ attentions.

In fact, a maekake exhibition was held at Kinokuniya in New York a couple of months ago.

20 maekake were displayed and entertained the local Americans and tourists’ eyes.

Unlike a regular apron, maekake is mannish, so it’s perfect for men.

It also can be a good tapestry when it’s not used. 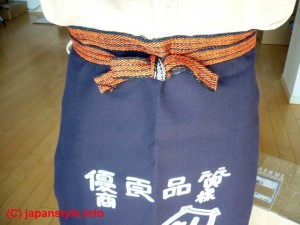 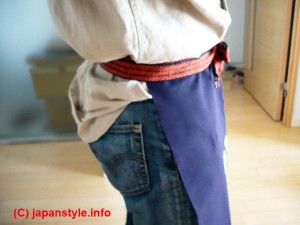