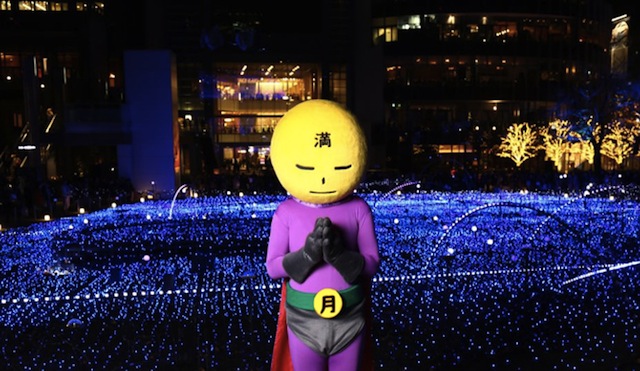 Japan is a land of “yuru-kyara” (relaxing character) mascots, such as Kumamon from Kumamoto prefecture and Funassyi from Funabashi city. The one I would like to share today is “Mangetsu-man” from Nihonbashi, Tokyo. “Mangetsu” means full moon in Japanese. As you can see in the picture above, he has a round, yellow, moon-ish head. This mysterious anonymous man dressed up in a purple bodysuit and cloak calls himself not “yuru-kyara” but “maji-kyara”, meaning SERIOUS character. According to the original article, one day in October 2013, a particular businessman suddenly decided to become a superhero, Mangetsu-man. He mainly cleans his town, Nihon-bashi, spending 4-5 hours per day keeping the area tidy. 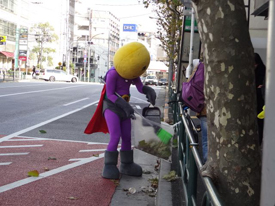 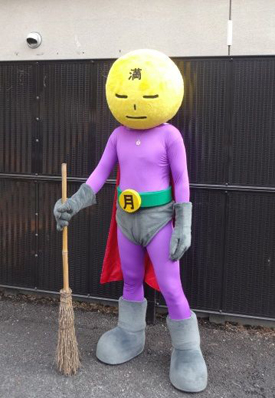 But why Nihonbashi? The Nihonbashi area has been one of the Japan’s major mercantile locations since the Edo period. But an unsightly expressway was built over the iconic Nihonbashi bridge just before the 1964 Olympics, ruining the beautiful classic view. Now Mangetsu-man and other local citizens are petitioning the government to move the expressway underground by the time Tokyo hosts the 2020 Olympic Games. Will Mangetsu-man and the residents of this Tokyo neighborhood succeed? We shall see!