In Japan, there is an old saying, “a woman’s heart and autumn weather,” which means both are fickle. Although it is not right to simply differentiate man’s and woman’s brains, many men think “it is hard to understand women‘s minds.”

In a Japanese web portal “goo,” there was an interesting article about “Top 10 Women’s Traits That Men Find Odd.”

Let’s look at the survey result they did!

#1: Try to get thinner than they should be.

#4: Eve though they say “I leave the choice to you”, complain the choice later.

#6: Shave their eye brows to draw.

#10: They have separate stomachs for sweets. 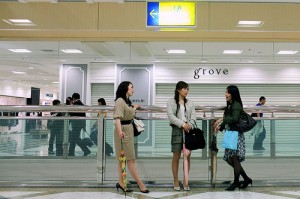 Other things that ranked in are for example, “carry huge bags,” “buy clothes that they never wear,” and “hold hands with girlfriends.”

Some of them may apply to women in your culture, but things like calling the same thing cute, or holding hands with girlfriends are unique characteristics of Japanese women. I don’t know it is universal but in Japan, it is common belief that women love sweets more than men do.

Source: goo ranking. The suvery conducted by goo in August 2008