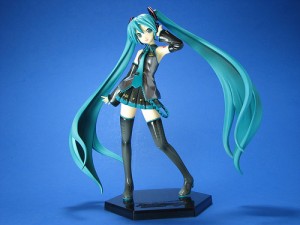 She is a Vocaloid Character.

Vocaloid is a singing synthesizer application software developed by the Yamaha Corporation.

With this software, you can let her sing by just typing lyrics and melody.

You can listen to the songs created by the software on YouTube too.

According to the production company, the character, Hatsune Miku is 16 years old, 158cm tall, and the weight is 42kg.

Her voice was sampled from a voice actress, and sounds anime girl.