Early this month, the 29th Haji-sai festival was held at Washimiya Shrine in Kuki, Saitama Prefecture. The festival used to be a typical Japanese summer festival where local people carry a portable shrine; however, it changed a lot since the town was used as the home town of the characters in a popular anime series Lucky Star.

The shrine and the street in front of it were crowded with about 72,000 Lucky Star fans including over 600 cosplayers in anime character costumes and yukata from all over the country.

It was the 4th year for them to celebrate with “Lucky Star portable shrine,” which is painted the characters. 150 fans carried it on their shoulders and a guy in costume was standing on it and leading the crowd.

The fans also enjoyed anime related events held at the festival such as cosplay photo shooting and otagei show.

The picture below shows the Washimiya Shrine on a week day. 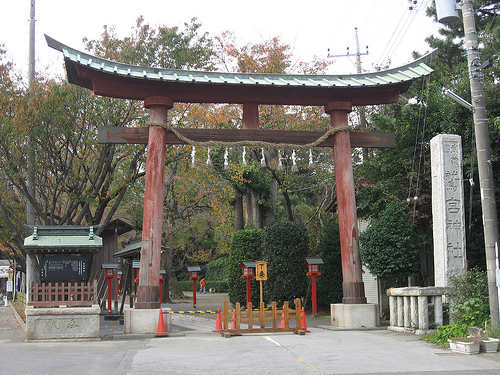