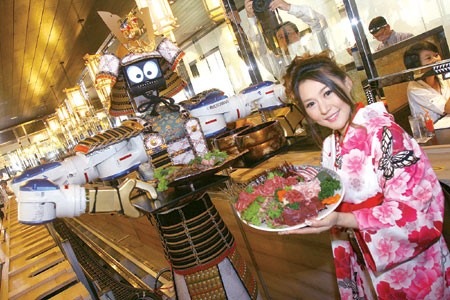 This samurai robot works at a Japanese restaurant in Bangkok, Thailand, “HAJIME,” which just opened three months ago.

The robot was made by a Japanese company, Yasukawa Electric Corporation. The owner of the restaurant imported the robot to use as a server.

Not only does he serve but also dances along with music! What an entertainer!

The restaurant serves Japanese BBQ, shabu-shabu, sushi and sashimi. It must be enjoyable to have meal and watch the entertainer (^_^)

This is JAPAN + THAILAND Style!