Is He a True Creator? : Meet With Outstanding Inventor 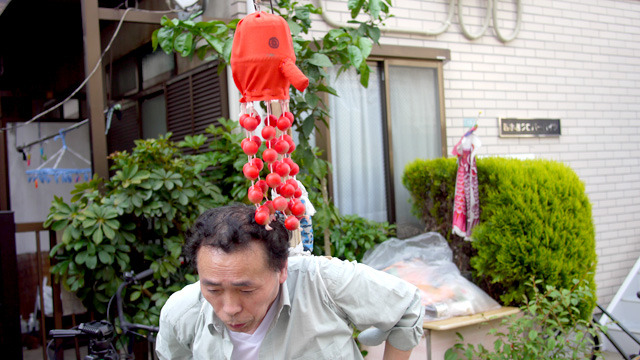 Of course, useful inventions are valuable, but today I would like to cast a spotlight on one unique inventor.

Can you guess what the man is doing….?

Here is the answer. He is just practicing swimming with his own invention named “swimmer-sen.”

This is Mr. Takahashi, who has invented various unusual items.

Honestly, I have no idea how to use this machine.

Now I understand how to use, but I have no guts to try it.

O.K., we should take a look at his other inventions.

Can you imagine what his next invention is?

It looks like an octopus with red balls, but….

Running with the octopus!? But, what for?

Ta-dah! As you can see, you can have lots of hair
after you get red balls massage on your head.
But is it supposed to green?

Anyway, I have to admit his inventions are far beyond our imagination.

He looks inventing useless things all the time, but truth is he is an awesome inventor originally.

Here is one of his most popular and successful works.

I can’t believe that he is the inventor of the peeler.

Not only inventing, but also he can draw illustrations, write books and even compose music.

“I want to try new things more, but I don’t have enough time to do, though,” he said.

How energetic! Apart from his eccentric inventions, maybe he is a true creator.