“A ritual to ease emotion”

He told a story related to his cat. 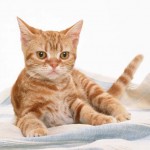 He met that cat one summer day, 10 years ago.

At that time, he worked at the company of equipment for housing.

“I put most of my brimming energy into loafing on the job.”

One day, when he parked his sales car by a curb and he was eating ice cream, he heard cat meowing from a cardboard box.

He took the cat to his apartment where he lived alone. And he named the cat “ Hime (princess)”.

At first, Hime had been very distant but before it passed one month, she followed everywhere Michio went.

Even he was soaking in hot bath, Hime sat on the edge of the tub and looked like enjoying mist sauna.

“At night, she slept in my futon. Sometimes she slithered up to my neck and almost suffocated me, so I woke up and pushed her off but she pressed her back passage against my nose and almost suffocated me again. It made me think while I was watching Mixed Martial Arts on TV, that when they use choking techniques, they try to make the opponent pass out by odor.”

In summer two years ago, Hime suddenly stopped following him.

She crept on a floor and was staring into far away.

Having feeling it was unusual, he took her hospital immediately and had various exams but the result was “nothing wrong”.

The next day, Hime passed away.

“I cried and cried, cried so much that I couldn’t eat, work and do anything. It was even hard to stand up. After tears stopped, probably because my autonomic nerve was damaged, I had severe headache and stomachache for a while.”

A mysterious thing happened after cremated her at a pet cemetery, he took her ashes to home.

His physical condition incredibly got well.

“As it is said, funeral is an indispensable ritual. I realized that in a lonely feeling.”