Being early 30s, she said her food preference changed since she was in 20s.

“My favorite food category is carbohydrate. I used to chant meat, meat, meat! Or Sugar, fat, sugar, fat! in my 20s, but I don’t relate to the craving now. I want carbs now. My friends at my age are the same too.”

The most attractive foods for her are bread and potato.

She can spend 30 minutes just thinking about potato, and the purpose of going to American restaurants is to eat mashed potato, but not for meat.

Eating too much carb causes health problems, so she can’t just eating mashed potato, but since mashed potato is not sold at Japanese supermarkets, it’s not so hard to run away from the temptation of mashed potato.

According to Tsumura, the problem is the temptation of bread.

In Japan, bakeries are everywhere and bread is high-calorie food.

Not only bread but the toppings like butter and jam have a lot of calories too.

“I often say, ‘I am happy with just some butter on my bread!’ but butter has much more fat than ‘just’ ” therefore; her friend and she swore that they eat bread only at special occasions. 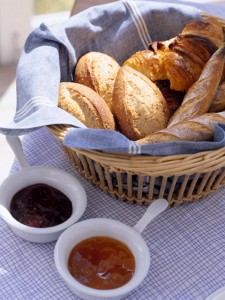 “But one-third of the texts from my carb friend are her confessions saying ‘I broke my promises. I ate bread again’. We promised to keep distance from bread…”

“Not so long ago, when the price of wheat flour went up, I was afraid that bread would be in short supply, and I went to a all-you-can-eat bakery everyday after work and sent texts to my friend saying ‘bread is yum’ every 10 minutes. What a happy time that was.”