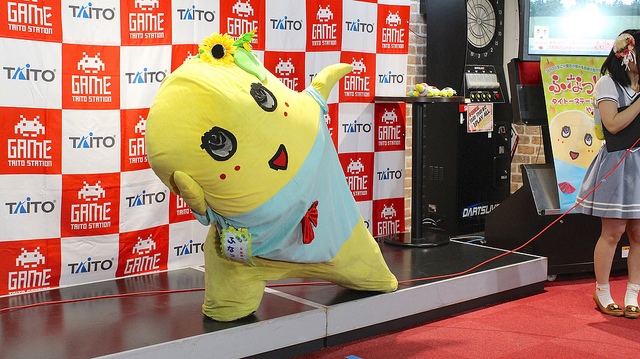 There are lots of regional characters in Japan, Most of which officially belong to certain prefectures, cities, towns and so on. A well-known character, Hikonyan, is Hikone city’s official character, and the Kumamon character was created by Kumamoto prefecture. However, the recent most popular character of Funabashi city (Chiba pref.), Funassy, is not official. Funassy began his unsolicited association with Funabashi for the simple reason that he loves Funabashi city. According to Funnasy, he is a fairy of “nashi”(=pear) which is one of Funabashi’s local products. One of his unique attributes is that he speaks, while other regional mascots mostly remain silent.

For those who don’t know Funassy, here is a video of his performance in a comedy show.

He always adds “nassy!” at the end of his sentences and he moves in a very funny way.

When I saw him for the first time, I felt an aversion to the way he speaks (too loud!) and moves (too quick!). But as I see him on TV again and again, I find him always trying to do his best, and gradually I have come to support him. Now I’m quite happy when I see funassy on TV 🙂

The number of Funassy fans like myself is increasing day by day, and what’s more, a lot of female fans are now crazy about him. Yes, they fell in love.

So today, I would like to share Funassy’s five essential elements to becoming popular with the ladies.

Look at his jumps! Amazingly high and beautiful!!

2. Being positive
Funassy is always positive and never speaks ill of others.

3. Being active (not passive)
He not only waits for offers from his clients, but positively keeps making proposals for better results.

4. Being considerate
Some of Funassy goods are produced in the 3.11 disaster-stricken area to promote employment. He donates a part of the sales and holds events to support the revival of Tohoku, but never shows off those charity activities.

5. Sharp sense of humor
He often leaves funny impressive words in the media. It must be fun if we can go have a drink with Funassy!