Photos of Amazing Tricks in the Ninja Temple in Kanazawa 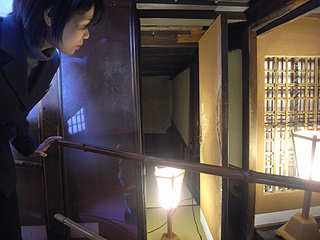 You may know what ninja is, but may not know “Ninja Temple”.

Today, let me share the interesting report of “Ninja Temple” by a Japanese blogger, who actually went there.

First of all, I have to say, there is no Ninja in the report LOL.

And it’s a long article, so you’d better go to bathroom before start reading LOL.

The temple is in Kanazawa, [W:Ishikawa Prefecture]. 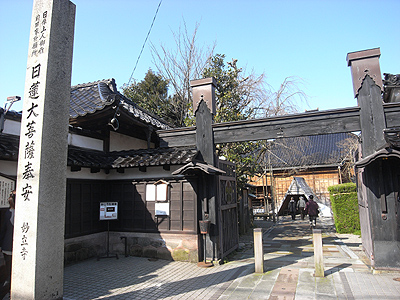 The temple’s name is “Shoukyu-zan Myouryu-ji” and it’s made in the Tokugawa shogunate era, so it’s been 360 years since it was built.

While many daimyo (Japanese federal lord) scrambled for territories, this temple was equipped devices to not get attacked. Since it had different tricks inside, it started to be called “Ninja Temple” among people. 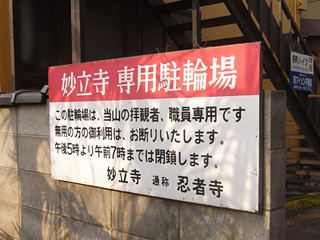 It is surely written “Ninja Temple” in Kanji 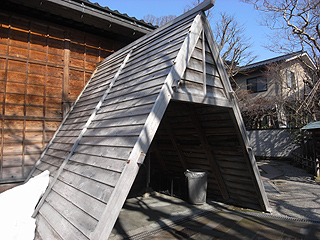 Is this the entrance!? Since it snows a lot in Kanazawa, the roof is sharp.

The temple has four-story but it looks two-story from outside.

At the time when it was built, it was forbidden to build three or more story building by shogunate, so the designer secretly made the temple with such structure.

Although it looks two-story, it has 23 rooms and 29 stairs. It must be terribly complicated inside. 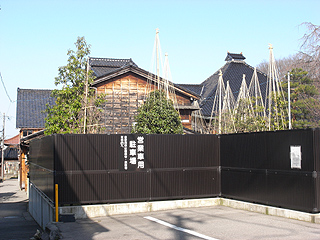 The fence is hiding the temple, but you can see it’s low.

Let’s get into inside of the temple!

The first thing that jumps into your eyes is an offertory box.

It’s buried into the floor, which is very rare. 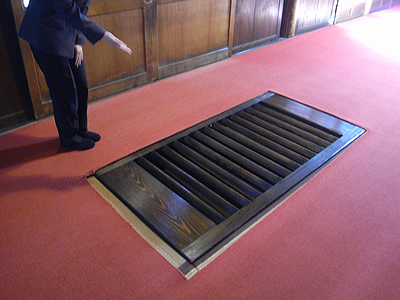 The person on the left is a guide of the temple, Miss. Iwata.

In those days, they took the box out and used as a pitfall in an emergency situation. 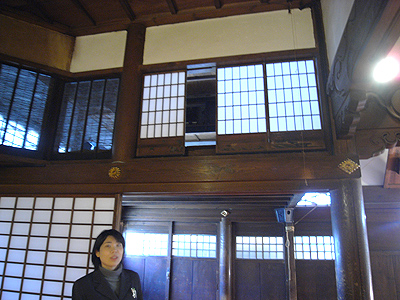 Inside of the main temple. You can see a mystery traverse. 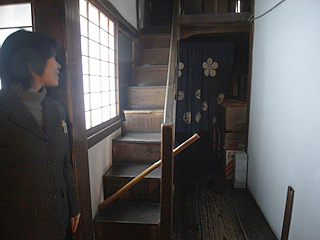 The stair to the traverse. It can be hidden by hoisting. 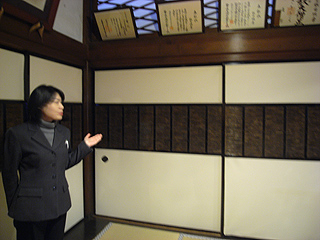 Wooden screen is put on fusuma door.
It works like a magic mirror; you can’t see outside from inside but can see inside from outside. 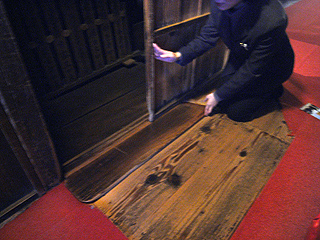 It looks a normal floor.. 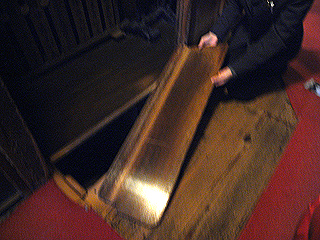 But when you open the door, the floor board comes off!?
The door works as the “key”. 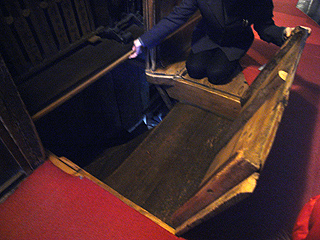 A stair came out!? You can escape from here. 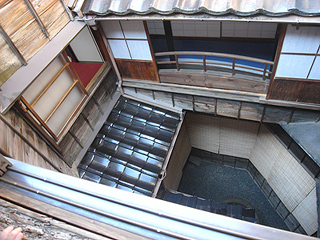 Looking into it from above.

Now it’ s time to show you the most impressive trick in the temple. 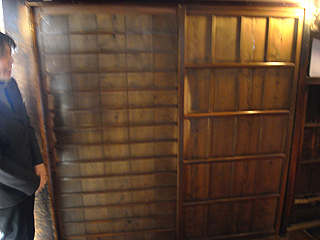 It looks a usual door. 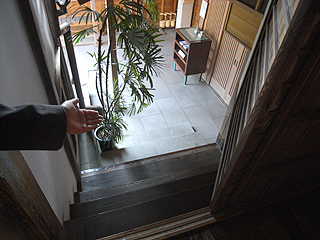 When you open the left door, it goes outside. 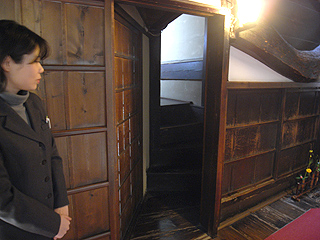 When you open the right door, it connects to another room. 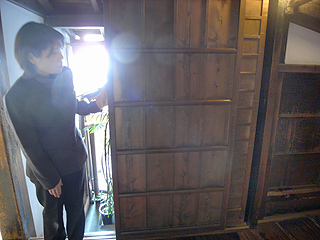 When someone comes inside, the doors will be like this.

The trick is,when a subject followed by an enemy came back to the temple, he opens the left door and quickly makes a u-turn and opens the right door and goes into another room.

The enemy following him comes in, but the left door the enemy opened hide the right door to the room (just like the right above picture), so the enemy gets confused.

In other word, the two doors hide each other by opening and closing.

According to the guide Miss. Iwata, all the visitors get impressed by the trick doors.

Seeing such logical tricks considering human psychological flaws, the reporter was impressed and thought “there are always people who have exceeding ideas in any time periods.”

The wisdom is not used for the tricks; it’s used in architectural technology too. 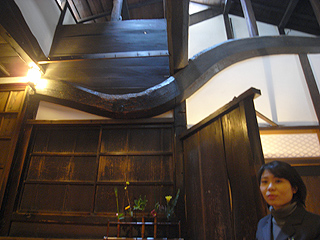 The crossbeam is curved.

Since Kanazawa has a lot of snow, it was curved intentionally to disperse the weight of snow.

If it was straight, it breaks when it snows. 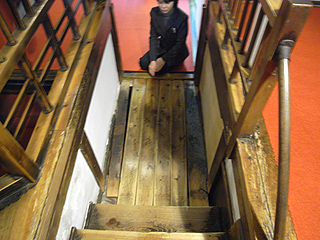 It’s a pitfall too. 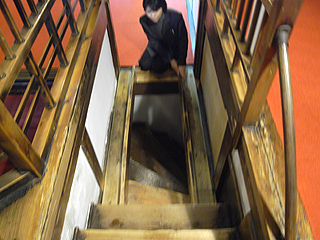 This pitfall was set near the entrance to strike terror into enemies’ hearts when they come in.

There is a tearoom too. 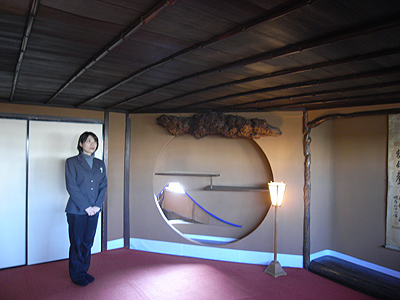 As you can see, the ceiling is low.
They made it low intentionally so that people can’t use spears and swords in a tearoom.

The last but not least…

There is a room with no windows and much oppressing.

The peeled off plaster is creepy…

There are four tatami in the room.

Once you enter the room, you can’t open the door from inside.

It’s said the room is for a samurai who lost in war can commit hara-kiri and start fire. (Actually, there was no one did hara-kiri in the room, so relax LoL.) 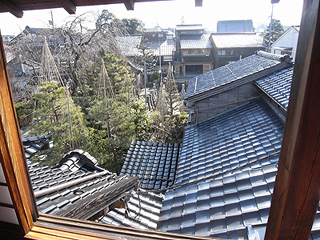 The view point that Miss. Iwata personally like the best.
You can see beautiful cherry blossoms in spring.

I didn’t know such cool temple was in Japan!

How could it be not famous? It should be reported on TV shows or newspapers.

If you come to Japan, you’d better go to the Ninja Temple rather than going major tourist destinations like sushi restaurants, the food floor of department store or Akihabara! (^_^)