Takeshi Kitano: His Life and Mission in France -Part 1 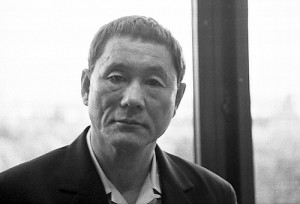 One of the best known Japanese people in the world, [W:Takeshi Kitano], who is famous as the director and main actor of such films as “Violent Cop”, “Sonatine” and “HANA-BI”.

In Japan, he is also popular as a comedian and an emcee of TV shows.

On March 24, his autobiography titled “KITANO PAR KITANO” will be released in France.

It’s written by a French Journalist, Michel Temman and Kitano himself.

Before the release of the book, Kitano accepted an interview by Agence France Press, and talked about his home town, his family, friends and his personal history.

His father was a painter, who loves alcohol and gamble and barely spend his time with his four children.

Through his films that depicting the dark side of human, Japanese “yakuza” got broadly known in the world.

Kitano thinks that he didn’t become one of them thanks to his mother.

“The area …was like Bronx of New York. …If there were not my mother’s strict education, I could easily imagine having been yakuza myself. …As far as I know, many of them just ended up being hooligans or killed. I think no one can reach the top in the vicious society there.”

Influenced by his education-minded mother, Kitano went to a University but he was more attracted by show business than studying.

In 1970’s he debuted as a comedian named Beat Takeshi at a strip theater and France-za in [W:Asakusa].

Immediately he became a big star having eight TV shows in a week.

In 1994, Kitano had a motorcycle accident.

He barely escaped death but his face partially got paralyzed.

After he recovered from the injury, he energetically, worked on films.

In 1998, his “HANA-BI” won the grand prize at Venice International Film Festival.

The story will be continued in the part 2…..