“A Manner in Italian Home”

The first email her son sent from Italy where he went to study as an exchange student was “I’m hungry.”

Since Sakou had assumed that the Italians people eat big portions of delicious food, her son’s email surprised her.

His email was also saying host family often told him that he ate too much.

She was worried about it till her Japanese friend happened to stop by at the host family’s house, and told her how they were having their meal. 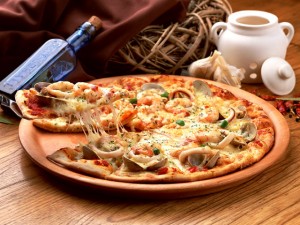 According to her friend, her son was dishing up food evenly for everyone to get equal portion.

The friend said “I think in Italy it’s common that when they have guest, they manage to get the guest’s food by cutting down each portion. I found it by seeing how your son was serving…”

Supposedly, her son hadn’t realized that the host family cut down their food to give him the same portion of food, so he had eaten as much as he wanted. (Later he realized and serving everyone equally.)

“…In Japan, when we have guests, we naturally prepare more food, right? We don’t think about sharing food by cutting our portion. In Italy, they don’t change the size of the food they prepare but they share equally. I guess your son got used to the custom.”

Usually, we are likely to take our own first, and then if there is extra, we think of sharing.

Sakou says such Italian custom (?) can be applied to natural resources.

“Everything has limit in its quantity. That is why, we want to secure our own things, but sharing with others makes us feel much better and doesn’t raise quarrels.”