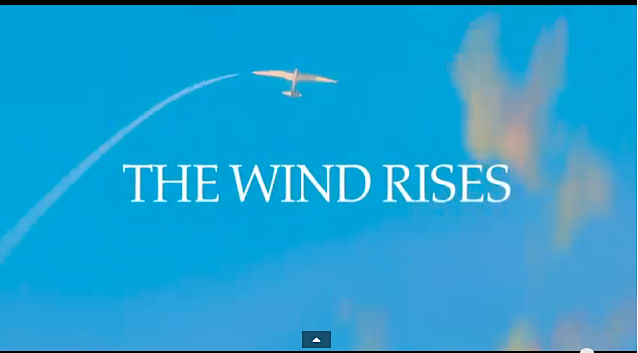 Have you seen the latest Studio Ghibli film, “The Wind Rises” (the Japanese title: Kaze Tachinu) yet? It was released last year in Japan, but here in America it hit theaters just at the end of February. So, I went to see it!

When I arrived at the theater, I first noticed that the poster was different from the Japanese one. Let’s compare the two. 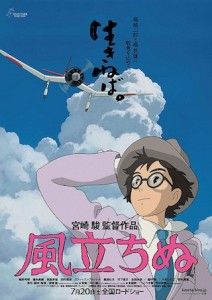 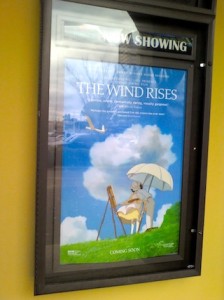 In the Japanese poster (left), the main character, Jiro is gazing up at the sky with the key phrase “Must live” written in striking Japanese calligraphy, creates a powerful impression. On the other hand, the American poster (right) suggests a more romantic film. I understand some kind of changes are always necessary as marketing strategies vary from audience to audience, but I personally like the Japanese poster better 🙂

I was very curious about what types of people would come to see the movie, because “The Wind Rises” is a bit different from other Ghibli movies that are seen as enjoyable mainly for small children. The story is based on the life of a man who really existed and was really passionate about designing aircraft. Some historical, tragic events serve as backdrops in the film, such as the Great Kanto earthquake of 1923 and, later, World War II. What’s more, The Wind Rises is PG13 film in America, because of presence of smoking in many scenes. Actually, when my husband and I got into the theater, the only other person in the audience was an old man with gray hair. A little later two young men came in, and then a group of two mothers and two sons (who were obviously younger than 13) joined. Well, there were only nine of us total in the audience (^^;)

I always prefer subtitled movies, so it was kind of disappointing when I found out the nearby movie theater was playing the dubbed version only. However, the voice-over for this film sounds quite natural and beautiful. I would say it never compromises the story. But still, I often wondered what the original Japanese words were throughout the movie, so I would like to watch “Kaze Tachinu” in Japanese, too!

This is not a movie review, so I will not write the details of my thoughts and feeling about the story. But I will say that I strongly recommend “The wind Rises”, even for those who have not been interested in the Ghibli films before 🙂