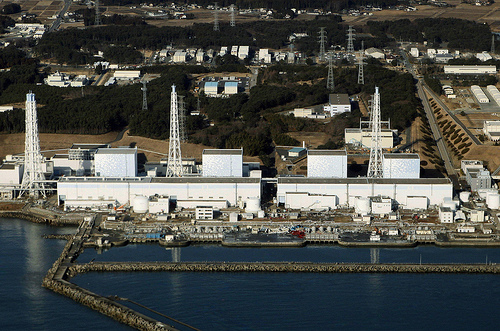 The world is really concerning about the nuclear power plant in the disaster area in northeast Japan. At the Fukushima Daichi Nuclear Power Plant, following to No. 1 reactor, No. 3 reactor’s emergency (reactor) core cooling system is not functioned; therefore, hydrogen explosion may occur at unit 3 just like No. 1 exploded at 3:30pm on March 12.

The fuel rods in No.1 and 3 are both exposed more than 2 meters now. There is a possibility that the rods are damaged or melted. When a fuel rod is exposed, the temperature inside of the reactor rises and may cause meltdown, and fuel rod explosion may also cause radiation leakage.

So far 62,000 residents live around the plant were evacuated; however, there are 589 people stuck in nursing homes near the plant.

Fukushima Prefecture and Japanese Self-Defense Forces have been testing people for radiation exposure, and 160 people are thought to have been exposed to radiation at most. We don’t know how seriously it affects on their health yet.

The level of radioactivity from the plant reached 1,557 microsievert at 13:52 on 13th, but 50 minutes later was reduced to 184 microsievert. Since we are not familiar with “microsievert,” let me give some example; a general man is exposed to 2,400 microsievert per year, and when you take one round flight trip between Tokyo and New York, you will be exposed to 200 microsievert. According to National Institute of Radiological Sciences, “It is not specially dangerous is anyone get exposed [to 1204.2 microsievert radiation]. It is equal to taking x-ray 2 or 3 times.”

At the Fukushima Daini –another nuclear plant on the coast in Fukushima-, 3 reactors were cooled by emergency core cooling system right after the quake, but the pumps to draw seawater to cool the reactors were damaged because of the tsunami, therefore, the Tokyo Electric Power Company said they would change the pumps to recover the cooling systems in early morning today.

The authorized people of the Fukushima Daichi Nuclear Plant had been very proud of the plant as “the world safest nuclear plant” as it passed the national earthquake resistance standards; however, they couldn’t avoid the serious crisis after the historical earthquake and tsunami.

What frustrates Japanese people is that government doesn’t announce the details of the plant relating matters. When the No.1 reactor exploded, the Chief Cabinet secretary just announced “there was some kind of explosion” two hours later. We know that the government is afraid to confuse people with unclear information, but at least they should announce the present state and the perspectives.