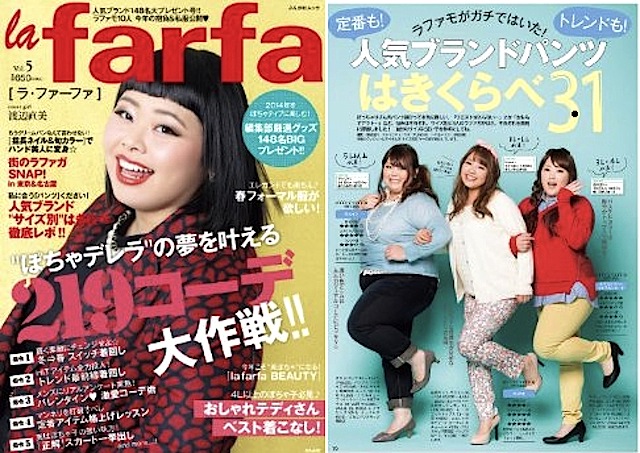 As we mentioned in an earlier article, recently in Japan a new phrase, “marshmallow joshi(=girls)”, referring to chubby girls, was coined and has become becoming very common. This phrase originated in a unique fashion magazine, “La Farfa”, that features only plus-sized girls. Marshmallows are white, soft and round, and remind people of these fair and chubby girls. (Well, the marshmallow man from Ghostbusters came to my mind first…)

La Farfa is loaded with fashion tips and coordinating examples for marshmallow girls (ex. how to choose colors and styles to take advantage of natural curves). What usual is not only the concept of the magazine. Models in mainstream fashion magazines are normally tall and skinny, and it is difficult to imagine how a particular outfit will look on a more Rubenesque figure (or even an average sized girl). However, La Farfa models are obviously “marshmallows”!

The founder (now chief editor) of La Farfa herself is kind of “marshmallow” and had been wishing for a magazine just like la farfa. The height, weight, bust-waist-hip measurements of the models are specified in this magazine, so that readers can compare with their own sizes.

Here is an interview video of the chief editor.

And a bonus video of their shooting backstage of la farfa. Japanese “yukata” look great on the marshmallow girls 🙂