Shocking News! Japan has the Highest Bald Population in Asia?

Today, I would like to introduce a rather heartbreaking article about ‘World Map of Hair Loss’…   (-_-;)

According to the article, a site has been creating wide range of world maps such as ‘Top 20 Beer Drinking Countries’, ‘Top 20 Chili Eating Countries’ and ‘World Comparison of Taxi Fee’ etc.  It seems these unique world maps were created, aiming to attract more people to travel, and baldness was finally chosen for the topic of new map… 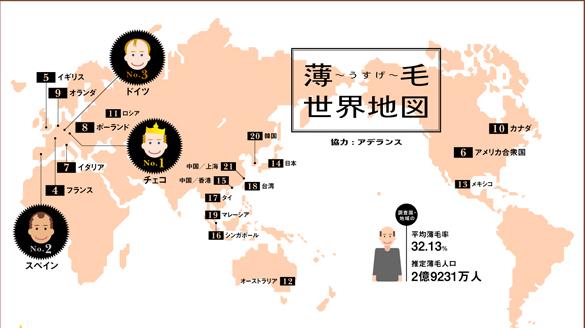 The findings??  Well, it appeared to be the 1st place went to Czech Republic, followed by Spain in the 2nd place and Germany in the 3rd place. 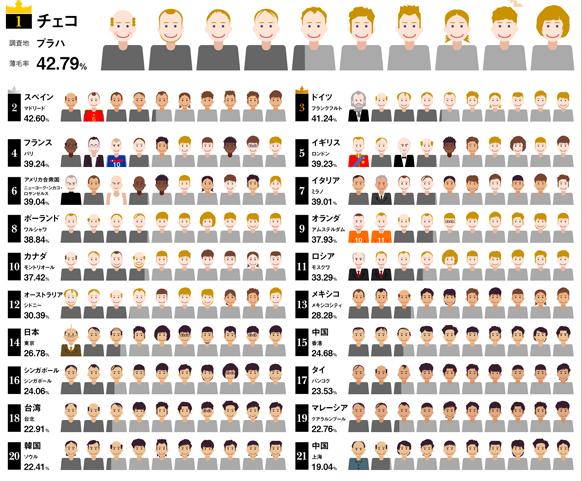 Well, is too early to feel relieved JUST YET…

Why?  Because Japan did a pretty good job by being ranked 14th; however, Hong Kong was the 15th, Taiwan was the 18th, South Korea was the 20th, and Shanghai was the 21st.  In other words, Japan reigns as the top hairless country in Asia…

Well, hair loss is actually accepted as a pretty sensitive issue in Japan, and it is carefully described even in comedy and cartoon…

If you have a close look at this baldness map, you will find that each value of countries has popular figure; Zidane, the former French football player for France or Steve Jobs. the former CEO of Apple Inc. for the US, and the former Russian President, Golbachev for Russia.  For Japan, we’ve got Namihei-san, a character of a very famous cartoon called Sazae-san.  With such unique method, this map managed to include sense of humour in such a sensitive issue Lol.  How clever it is～!

This ‘World map of hair loss’ became a big topic on major social networking sites right after its release.  Some even says that they are moving to Czech Republic in order to protect dignity… Lol  This somehow reveals that how hair loss can be a serious problem in Japan and how people try to avoid this topic (-_-;)

If there is any interesting map in your country, please let us know with the link to the website☆