Is It Difficult to Raise Children in Japan? – Part 1 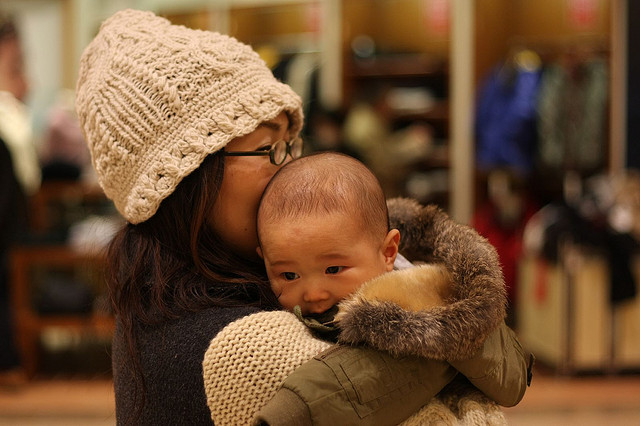 A few days ago, one of my friends living in Indonesia posted a sad story on her Facebook page. She is now temporarily staying in Japan for a vacation, and a sad thing happened in Japan. One day, when she was on a train, her one year old baby started crying. She got quite upset because her baby kept crying and crying and some passengers started giving her some very irritated, annoyed looks. finally, one of them started complaining and, shockingly, snapped at her and her baby, “Die!”

This might be an extreme example. Yet, in Japan, using public transportations with small children (especially in big cities/during busy hours) is a controversial subject. For example, just a few weeks ago, a well known business person, Takafumi Horie, during  a dispute with one of his Twitter followers, said “Clicking tongue at crying baby is not so blameworthy”, “Wonder why parents don’t give children sleeping pills (when they use public transportations)”, and so on. What’s more, there was an incident in which famous manga writer Mimei Sakamoto complained about a crying baby on an airplane flight (read more about this incident >> CLICK) I don’t have children and don’t particularly enjoy hearing infants crying in confined public places, but still I personally can’t support these people’s opinions. Couldn’t they just be a little more tolerant?

A couple of years ago, my husband and I lived in Indonesia. The life there was full of challenging cultural experiences and stark differences than either of us were used to. One of the indonesian norms that we found quite different from what we had been used to was of of families having full-time maids and nannies. In Japan, it’s very rare to personally hire someone (even a part-time babysitter) to take care of babies. In Indonesia, it seemed like children were especially precious and forgivable, and people were always kind and tolerant when it came to the behavior of infants and small children. It is generally assumed that Japanese people are polite and kind, but some (many?) of them seem very intolerant when it comes to small children and their parents – especially in public spaces.

I often hear that it is difficult to raise children in Japan. Many of my friends have made decisions to move abroad with their children, and still more aspire to. But exactly how and why is so hard to bring up children in Japan? I would like to explore this in my next article…