How Many Arms Does He Have? Japanese Juggling World Champion, “Senjyu”! 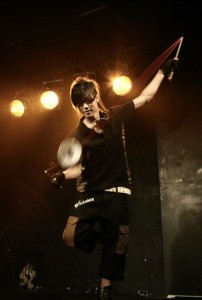 The other day, I met an 18 year-old college student at a party.

His name is Yoshiaki NAGATAKE, the most famous Keio University student in Japan.

He was the world junior champion of IJA (International Jugglers Association) Stage Competition of 2007. 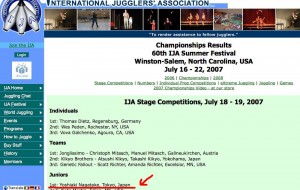 I saw his performance at the party, it was really impressive. So I decided to interview him to share in my blog.

Before we move on to the interview, let’s watch his brilliant juggling techniques.

1: What does your stage name “Senjyu” mean?
– It’s after Senjyu Kannon (Buddha with Thousand Hands) because my friend told me “I see lots of arms around you, like Senjyu Kannon.”

2: When and how did you start?
– When I was at 7th grade, I was moved by a 9th grade student’s juggling performance at our school festival, so I talked to the student after the performance. I borrowed the prop and practiced it rest of the day without paying attention to the festival.

3: What’s your specialty?
– Chinese yo-yo called diabolo is what I am good at. I can juggle anything in general like balls, clubs and rings, but diabolo is my specialty. I entered and won the junior championship with diabolo only.

4: How long do you practice a day?
– I used to practice 8 hours a day but I am busy at university lately, so now it’s 2 hours. I practice as much as possible whenever I have time at various places; at a gym, a park or basically wherever the ceiling is high (or none).

5: What your future course will be?
-I am not going to make my living by juggling only. I will be a Sunday- performer who performs only weekends, but I consider finding an employment after finishing college.
Since I gained the title of “champion”, I have been self branding to sell my self. In the process, I got interested in “self branding”, which is why I hope to work at an advertising agency. I just don’t want to end up as a “salary-man” but want to be a social entrepreneur who aims to “improve the social status of entertainers in Japan”. It’s not too much to say that I am going to find an employment just because I want to acquire skills and procedural knowledge, and also to save money.
As a performer, a creative director and a social entrepreneur, my future goal is to be a man with a lot of “drawers (capabilities)”.

It may be different in other countries but there are not so many 18 year-old who can talk about what he/she thinks of or plans for his/her own future in Japan.

Looking back to age 18, what I remember is just attending classes at college and going to a part time job…

After the interview with Yoshiaki, I was assured that he will be a world class material and accomplish his dream.

While hoping for increasing of young Japanese who can contend with the world like him, I was encouraged to work hard on my business to not beaten by them.

He is very handsome, like he should be in an idle group!

If you want to send him a fan letter (a message), I will send him for you, so feel free to send me an email!! 😮