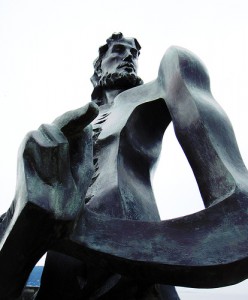 A Statue of Anjin. "mahiro1322" some rights reserved. flickr

William Adams, also known as his Japanese name Anjin, was a sailor who drifted to Japan in 1600.

He worked for the shogun [W:Tokugawa Ieyasu] and lived as a bushi.

The play shows both Japanese and English subtitles, so wide audiences can enjoy it.

The production team considers playing it in England in the future.

Promotion for the “Anjin: English Samurai”