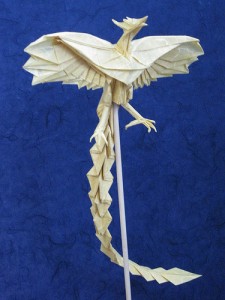 Can you believe it is a folded ONE sheet of paper?

This origami “Phoenix” was made by a Japanese origami artist, Satoshi Kamiya.

Being the most advanced origami master in the world, he has been introduced in a daily newspaper in El Salvador and traveled to Canada to teach origami.

One of his works, “Wasp” is considered as his finest work, and it was displayed in the HERMES show window in New York.

In the video below, you can see how he makes a dragon and his works including the “Wasp” and his spectacular “Ryu-jin 3.5 (Chinese Dragon)”, which is shown at the end of the video.

<Video Description>
“It’s about how to fit various parts into a square.

It is very interesting when different parts rightly connect to each other.” Kamiya says.

He shows how to make a dragon with a 65cm by 65cm square Japanese paper.

First, he makes creases. At this point, he has the development diagram in his mind.

Once he starts folding it, his hands never stop. 3 hours later, the piece of paper became a “Divine Dragon”.

He invented it when he was a high school student.

“Sometimes several ideas perfectly match up with each other, and I am sure it’s going to work even before I actually start folding it. Those are the most enjoyable moments. It’s like I can’t wait to finish it up! In fact, “Ryu-jin” was one of them.”

Satoshi Kamiya’s works are shown in his personal site (All rights reserved. Allow personal use only. Forbid distribution and creation of derivative works.)