KAMAKURA — A Historical Town in Japan 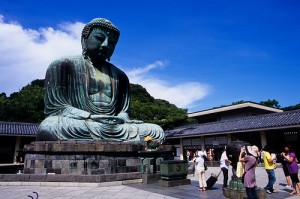 The Great Buddha of Kamakura. "chris.jan" some rights reserved. flickr

Kamakura is a popular historical tourist site in East Japan.

Having been a political center of Japan between the end of the 12th century to the mid 14th century, Kamakura has historical temples and shrines.

The most famous monument in Kamakura is the Great Buddha (“daibutsu” in Japanese), which is a bronze statue said to be made in 1252.

It’s in the Kotoku-in temple site; therefore, to see the statue, the visitors pay 200 yen (about 2 US dollars) of admission fee.

Plus 20 yen (about 20 US cent), allow the visitor to go inside of the statue.

Kamakura is not so far from Tokyo.