“The Words of the Year 2010” ceremony was held last week in Tokyo. The words represent what are popular now in Japan.

The word received the grand award was “GeGeGe no-.” It came from a title of a popular TV drama “GeGeGe no Nyobo” broadcasted by NHK. It is based on the autobiography written by a Japanese famous manga writer, Shigeru Mizuki’s wife, who supported him since he was a nameless poor manga writer.

These characters in the picture are in Mizuki’s popular monster manga, “GeGeGe no Kitaro.” 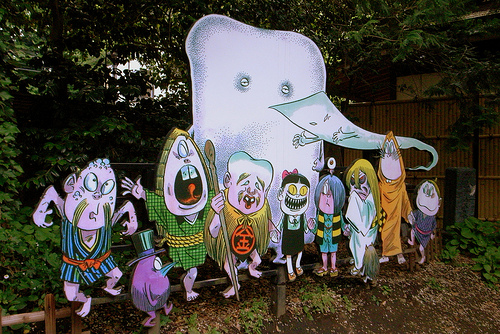 Joshi-kai (Girls Party): “Joshi” means girls or women, and “kai” means party or meeting. In the past year, many restaurants and other businesses started offering “women special deal” as women get together more often influenced by American TV drama and film “Sex and the City.”

Taberu ra-yu (Chili Oil to Eat): Japan has been in chunky chili oil boom. Use it for cooking or eat it with rice… people enjoy chili-oil in various ways.

-nau (now): “Nau” is Japanese sound for “now” in English. Twitter users used it to tweet what they are doing. For example, when you want to say “I am eating sushi now,” you can simply say “Sushi nau (now).” Once people got used to using it, they use “nau” everywhere, even in other chat rooms or blogs.