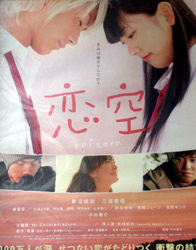 Today’s cell phones are so diversified, that it was enabled to take pictures, watch TV, play music, play games, use internet and so on.

For young generations, cell phones are their main tools to communicate with others through text, mobile blog and website.

Against the background of the cell phone culture, “mobile novels (keitai shousetsu in Japanese)” which are written and read on cell phones became popular especially among teenagers to 20’s people in 2007.

The genres of mobile novels are varied but tragedy and love stories are more popular.

The most accessed mobile novels were made into books, TV drama, movies, and became smash hits; however, mobile novels are often criticized as being cheep and poor in vocabularies by famous writers and novelists.