Do you know Blog Action Day? It is an annual event that the world’s bloggers post about the same issue on the same day to turn it over in our minds.

This year’s Blog Action Day is on the theme of “water.” The host of the event explains the reason why “water” this year.

“Right now, almost a billion people on the planet don’t have access to clean, safe drinking water. That’s one in eight of us who are subject to preventable disease and even death because of something that many of us take for granted.

Access to clean water is not just a human rights issue. It’s an environmental issue. An animal welfare issue. A sustainability issue. Water is a global issue, and it affects all of us.”

The first topic is “The Present State of Water Supply in Japan.” Because I am not an expert of that field, I can’t write at a technical level. So I want to write about how water is used and its role in daily life in Japan.

What tourists from other countries often say about Japanese water are “it is amazing that drinking faucet water is safe!” and “they serve water at restaurants without ordering it!”

Both are common things for the Japanese, but we can’t expect the same things in other countries. It often happens that Japanese tourists drink water in another country and get diarrhea (I’ve never heard that foreigners got sick after drinking Japanese water). In some countries, restaurants charge for a glass of water in the first place.

Considering these facts, Japan might be water-rich country. As you know, we have the four seasons. In early summer, we have tsuyu, the long spell of rainy weather throughout the country. The rainwater is filled in dams and purified, and then supplied to households.

Although we do have the water supply system, climate change –which was last year’s topic-, is clearly seen in Japan, and hardly rained in rainy season and water ran out from dams. Consequently, some suburban cities economized in water consumption for a while.

This is my conjecture but maintaining water supply is one of the important keys behind Japan’s great development after World War II.

Water is not just to drink; we use water everyday for shower, laundry, and cooking. If we can’t satisfactorily use something that we use everyday, stress builds up and it interfere with work. Having maintained water supply promptly, the Japanese could concentrate on work even better.

My conjecture may have a logical leap; however, when I hear that people in Africa make a few km of round trip everyday to draw water from a well, I cannot help believing that there is big relevance between water supply and economical development.

In Japan, water is in plentiful supply. Anyone can drink free water at households, platforms of train stations, parks, or restaurants (of course households pay water bill. And you can’t leave a restaurant after just drinking water). When I go to a circle or seminars on business, bottled mineral water is often provided for free, while variety of mineral water is sold at supermarkets and convenience stores, probably due to recent healthy boom. 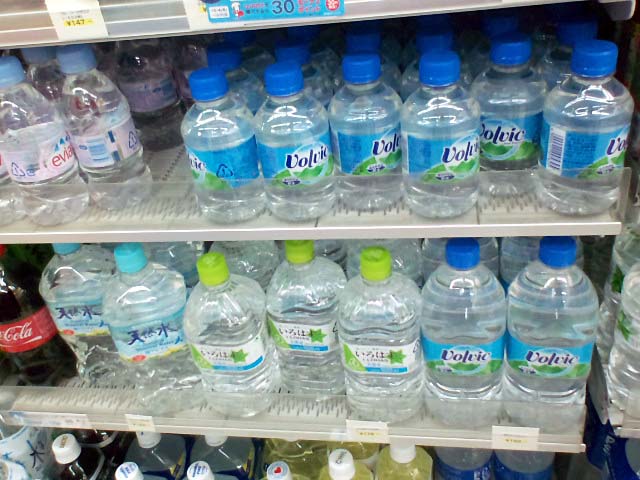 These days, the people who can’t be satisfied with quality of faucet water or carrying bottled water are increasing. The custom of “buying drinking water” has been established in Japan as well as other countries.

In conclusion, what holds the key to clean “water” in Japan seems to be dam facilities, purifying and supply system rather than the scientific fact that we have a lot of rain.

The next article is about water purifying methods and water business.