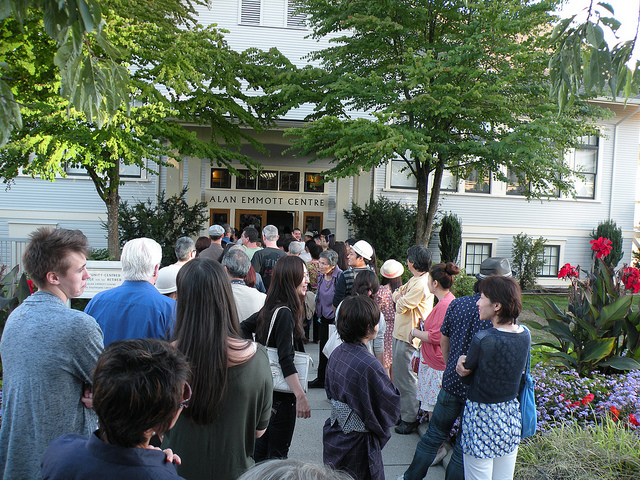 (Audiences got together to see a performance by Sunshine Katsura in Burnby, Canada)

Rakugo is one of the Japanese traditional arts which came into existence during Edo period (1603-1868) in Japan and has been handed on to today. It is a type of dramatic performance which requires high skills with gestures and storytelling.

Mr. Katsura is the pioneer of Rakugo storytelling among foreigners living in Japan. He is from Toronto, Canada and has started his first tour in 20 cities (30 performances) in both the US and Canada between 29th Aug and 5th Oct.

He showed 2 original Rakugo stories in Vancouver. These were performed for audience in the English speaking country in English but Mr. Katsura did not make any special adjustment for Canadians. He believes that the story should remain as close to the original as possible. Despite the cultural differences the original story in Japanese can make the Canadian audience roll with the same jokes.

On the contrast to his prior anxiety, his performances were fully attended and received a roar of applause. He got a sense that Rakugo could become popular in Canada too.

If you would like to have a taste of Rakugo, here is a performance by Mr. Sunshine Katsura by Youtube.