Let’s Go Get Some Cool Air in the Cave 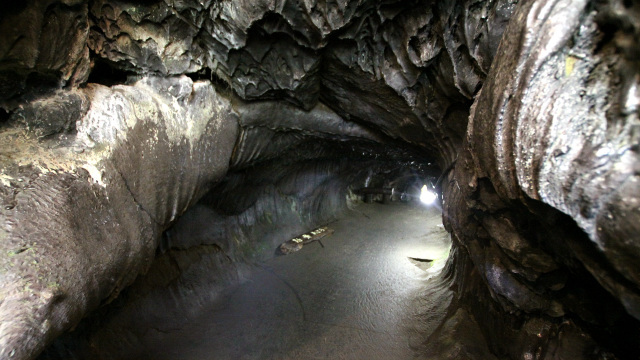 Do you know there are so many caves and holes around Mt. Fuji?

It’s already September, but it is still really hot. It’s getting a little bit cooler in the morning and night, but in daytime, hot and humid air covers the city, it really makes us sick.

Searching for cooler place, the writer of this article suddenly rode his bike and headed toward Mt. Fuji one day.

Why? What’s the purpose?

That’s right, he headed the caves to get some cool air! 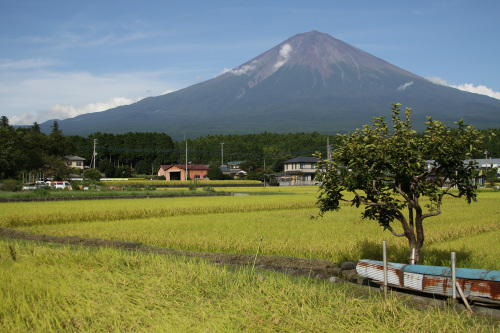 This is the beautiful Mt. Fuji, the pride of Japan.

At the foot of Mt. Fuji, especially around Aokigahara forest, there are a lot of lava caves where you can go into relatively easily without any experience and enjoy sightseeing.

The temperature of those caves stays constant throughout the year. Therefore, we can feel cool in summer, and warm in winter. It seems much better than the city we live, we’d rather be happy to live there if we could find a nice room.

First, the writer went to Bat Cave, located on the side of West Lake which is known as one of the Five Fuji Lake. 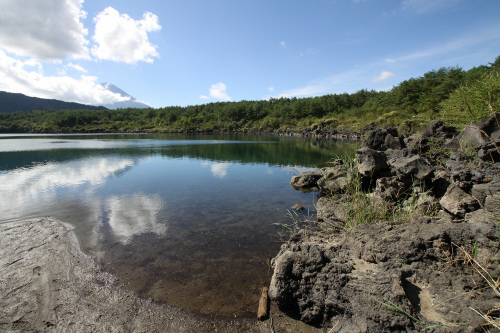 This is the West Lake, edged with lava. 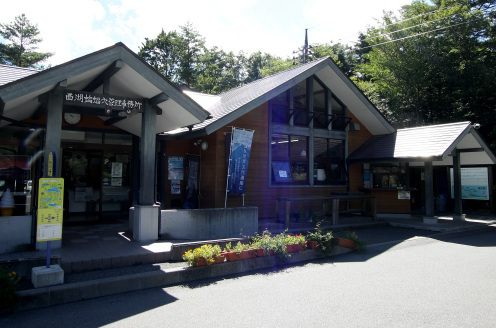 This is the management office of the Bat cave.

Only 5 minutes ride from this house will bring you to the cave. 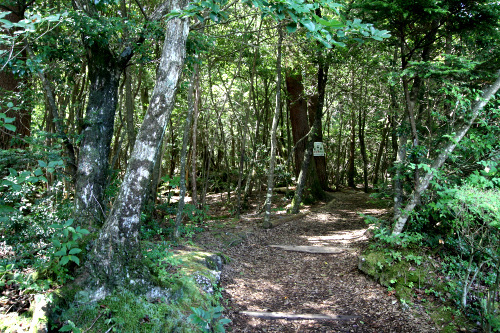 Once you take a step outside, an ocean of trees spreads all around. 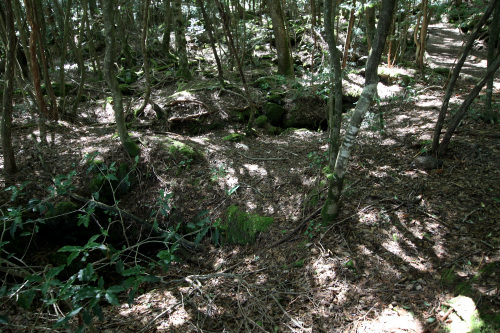 There are small holes all over the forest. 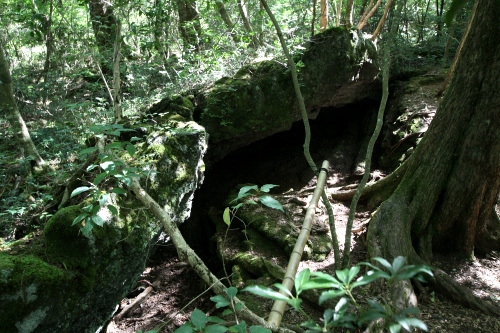 Is this a cave or hole? 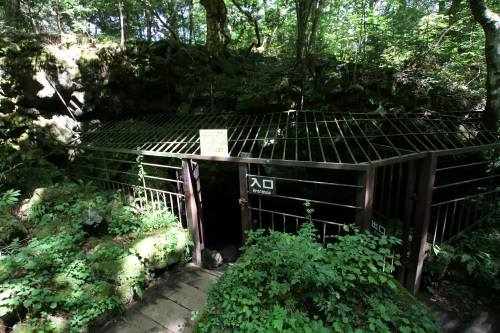 A few minutes later, he arrived at the entrance of the Bat cave.

The entrance of the cave was protected by steel fence. The space of its each bar is relatively wide, it is because the bats will go into the cave from here.

Putting a helmet on his head, he took a first tentative step toward the cave. As soon as he went inside, he was surrounded by the cool wintry air.

The inside was dimmer and narrower than he expected. As the ceiling was low, sometimes he had to bend down to step forward.

Wow! This is the mystery of nature!  😯

Though it was not very deep in the cave, up and down ways were so hard to walk through, it made him so tired.

But unique landform and a lot of bats made him enjoy the tour. Actually he cannot live in there, but it was good experience for him.

Next one he went was Fugaku Wind Cave, which is located about 15 minutes away from the Bat Cave.

The cave looked a major sightseeing spot, the spot was crowded with many people. 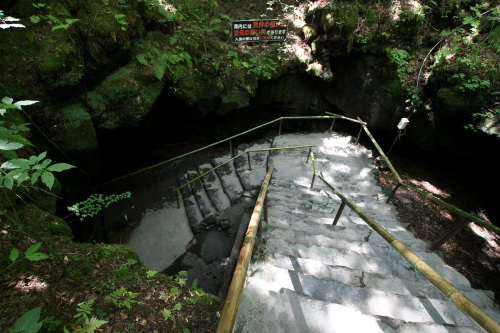 Stepping down to the inside, it’s getting cooler and cooler. 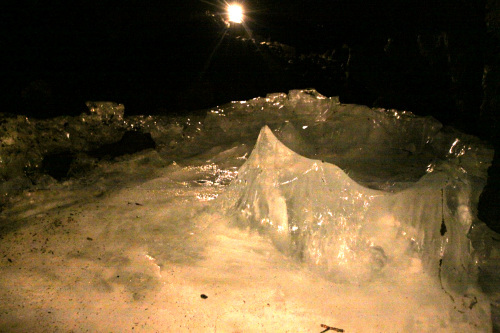 Wow, ice in the cave.

This means that the temperature would be 0 degree. It’s not a refrigerator, but it’s a freezer.

Stepping forward, it got colder and colder. The writer was wearing only short sleeve shirt, he felt completely helpless, but only he could do was to step forward toward the exit. 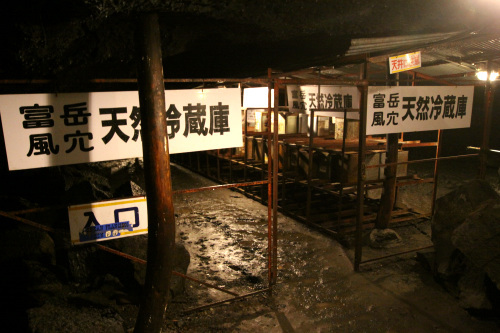 Actually this cave had been used as a storehouse in ancient times.

Yeah, it does make sense, because it is cold enough. 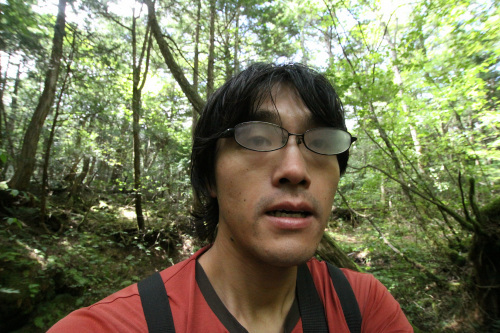 “It’s too cold! I wanted the cool place, not cold.”

As soon as he came back outside, his glass was steamed up.

Next one was Narusawa Ice Cave.

As the name implies, it also looks very cold as the Fugaku cave. 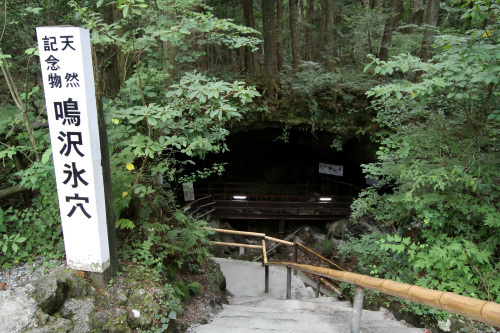 You can feel some cold air here, coming up from the base.

This was the steepest cave among all the caves he went. 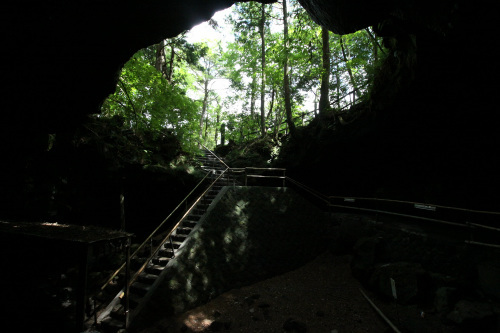 The scary tour comes to an end with the steep stairway.

This was the deepest and steepest cave, it made him totally exhausted.

Now we have seen a various lava caves around Mt.Fuji through his hard experience. What do you think?

He felt cold rather than cool, but actually he enjoyed this trip as an exciting adventure.

I believe this would be unforgettable experience for him in his future.

I would be grateful if you let me know your unforgettable experience in summer.