What is the Origin of Suika-wari or Watermelon Cracking of Japan? 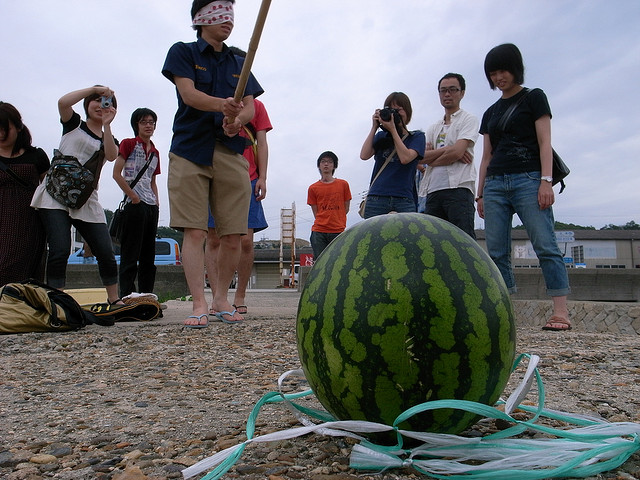 By the way, what is the origin of this entertainment, do you think?

Well, according to an article, it seems there are several stories behind it, but nobody is sure which one is correct one.

But according to an official rule & manner book of the Japan Suika Wari Association (!), it seems to be originated from a kind of training of sword fighting.

But due to the book’s comical nature, the writer of the article I found seems to be not sure if this is the actual origin.

So is there any other story?

It seems other stores include following; a samurai general, Hideyoshi Toyotomi started this for an entertainment of his castle-warming (!) party; it is for a repose of a samurai, Kojiro Sasaki; and it came from Africa to wish for a good harvest of watermelon???

Ow, I cannot really tell which one is true (><)!  But let me guess…  Entertainment for Hideyoshi Toyotomi…  Possible.  The repose… hmn, I’m not sure about this..  African origin…  Yes, the fruit seems to be an African origin… but yes, I bet on sword fighting practice, shall I??  Maybe?

FYI, watermelon cracking nowadays is typically carried out on a big plastic sheet, so once it is cracked at least into a half, we cut them into smaller pieces to eat after the event.  So we are not wasting food. (of course, if people keep hitting with not enough powers, it could be a bit of mess…  skill required!)

Please let me know what you think.