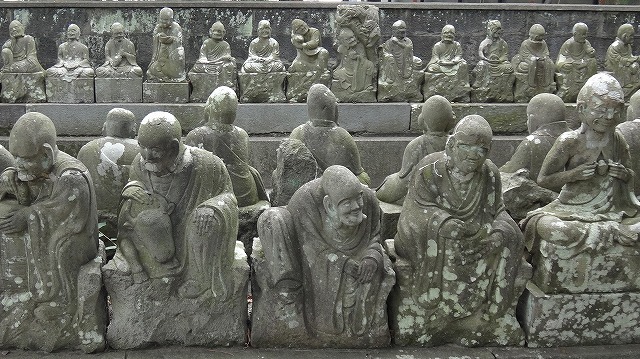 Looking at the each buddha closely, they sit in a huge variety of styles and expressions, it’s really interesting.

The writer of this article went to a temple, and picked up some interesting buddhas, so I would like to introduce some of those.

The temple the writer went is “Kitain” in Kawagoe city, Saitama prefecture.

There are 533 buddhas in this temple which had been spent for about 50 years to build, hundreds of years ago.

There may be the one resembles you… Let’s find your favorite buddha.

Smiling, confusing, doubt, anger, sleeping. They are in a various feelings.

There are also buddhas talking each other.

A story or drama between them come up, and it’s full of humanity!

He is alone, but he suffers from something.

On the other hand, these men look feeling bad.

Now we have seen many buddhas with various feelings.

The writer of this article went to see these buddhas to find some interesting ones, but every of those were not only interesting, but also were full of emotion and humanity.

Though they were built hundreds of years ago, even now they prove that the people’s feelings and expressions have not been changed over the course of human history. I felt strong sympathy for them, and would like to thank the writer of this article because he introduced us such a wonderful pictures.