There are many cultural ceremonies and rituals in Japan, but whether to follow the tradition or not is really up to each person.  But according to an article, there is a little  house construction related ceremony which almost all Japanese households carry out before building new building.

The ceremony, called Jichin-sai, is a Shintoism ceremony to purify the ground where new building is going to be built. During this ceremony, a Shinto priest pray to a god for safe completion of house building work with a presence of  a construction company involved and future house owner. 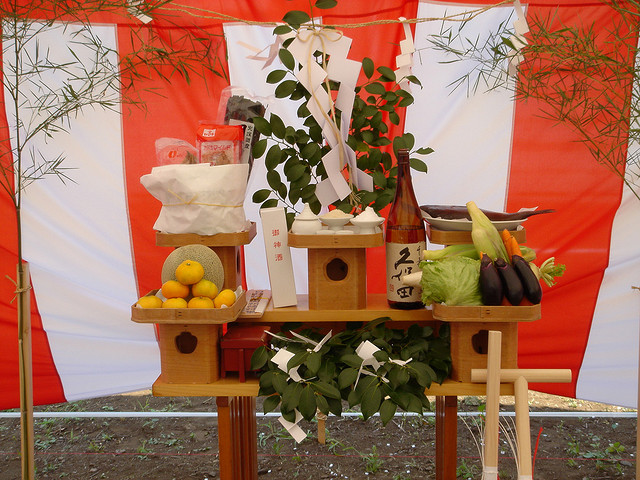 Usually, a little Shinto alter is made for the event with offerings to the god as shown in the picture above. Of course, there is no written regulation which indicates that this kind of ceremony is absolutely compulsory, but this Shinto ceremony is done for almost all new houses, office and other buildings regardless of future owners’ religious belief, and it’s generally included in the house building quote in the first place.

By the way, there is another house construction ceremony, called Joto-shiki ceremony or framework raising ceremony; however, this one is not as popular as Jichin-sai ceremony. Joto-shiki ceremony also involves a service by a Shinto priest to pray for a safety construction of the house, but the difference from the Jichin-sai ceremony is that people sometimes scatter mochi and money from the top of the building. It seems people traditionally believe that building a house involves a high risk, so people try to avoid risk and bad lucks by scattering mocha and money from the beam of the house. 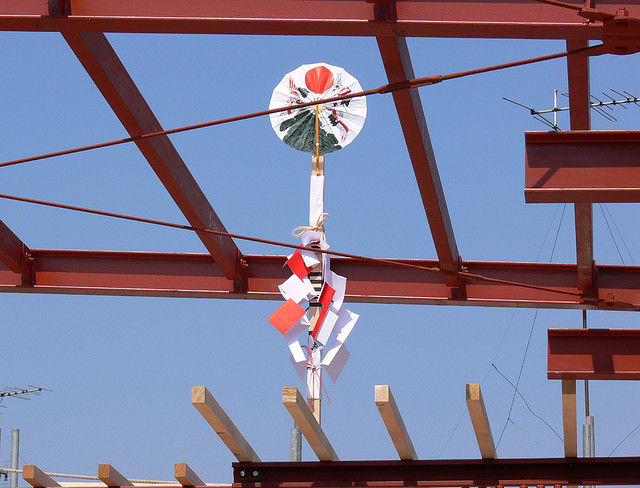 Japanese are generally superstitious (including me! :-)), which is the reason why almost 100% of people follow this kind of rituals. And even if you don’t believe in this type of ceremony, it’s supposed to be done for the sake of construction workers safety and piece of mind^^

I’m looking forward to listening to your view as well as your country’s story.