Wasabi Stories vol.95: “It’s important to strike a balance in everything”

“It’s important to strike a balance in everything”

Today’s story teller is an actress [W:Yoko Akino], who is a mother of 15 year-old daughter and lives just with her.

In the article, she talked about how she raised her daughter.

The high schooler daughter is an assistant of the baseball team at her school.

“She works hard there washing dirty uniforms and preparing the papers for their games.” Akino talked about her daughter, “What made her interested in working behind the team was maybe her adolescent rebellious spirit that she wants to do something that her parent can’t do. Even the team wins, she doesn’t get so much credit but I am glad that she can do such role.”

Since now she is a high schooler, Akino loosens the tension toward her.

She doesn’t scold her daughter in public or barrage her with questions when she goes out.

“Allowing one is the same as allowing hundred.”

When a child goes out, he or she is out of the mother’s sight, so Akino said that what she can do is to only believe her daughter.

Since Akino got her daughter after eleven years of fertility treatment, when she gave her birth safely, she decided to have close relationship with her daughter.

It didn’t mean to indulge her child but she meant to do the best for the child.

Akino described how she had been strict to her daughter. 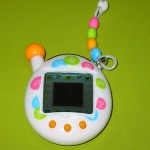 For example, when her daughter wanted a handy game called “[W:Tamagotchi]”, she told her daughter to buy it by saving her 500 yen (approx. US$5)/ a month allowance and 10 yen reward for an each small service.

Her daughter finally saved up enough to buy the game and she went to a store but her money was short for the tax.

Because Akino went there together, she could’ve paid for the rest but she didn’t.

She turned her back on her daughter saying “you didn’t search enough about the price”, and they left the store with empty hands.

Her daughter cried a lot but Akino hardened her heart and said “no means no” with the idea that she needed to play a father’s role too since she got divorced.

Although Akino tries to loosen the tension, she can’t stop complaining her daughter like “your room is messy” or “you stay too long in your pajama”.

But her daughter replied,

“I act properly at school. I am considerate at the team. Let me be like this at least at home.”

Akino realized that her daughter is striking a balance for herself.