In the Early 1980’s there were very popular cats called “Name-Neko”. These were real kittens in Japanese motorbike gang costumes photographed with kitten-sized miniature sets, and over 500 kinds of character goods were sold at the peak of popularity. Children were crazy about collecting those goods. What I liked the best was the Nameneko driver’s license. 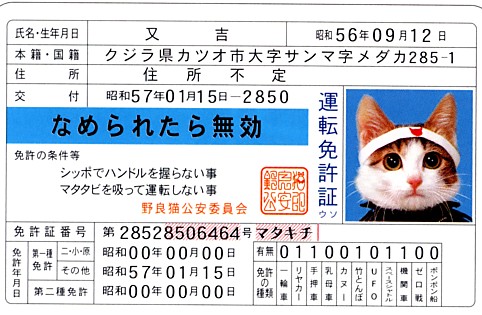 Looks exactly like a real Japanese driver’s license, but with a clever twist. For example, his street address is in “Bonito city, Whale prefecture”, and as a special note this license states “Do not grab handle with your tail” and “Do not use catnip when driving”. Many drivers showed this Name-neko license to police officers, and the police raised an objection with the novelty toy maker ^^; Kind of funny, isn’t it ?

This “Name-neko” project was produced by a young Japanese man named Satoru Tsuda. One day at home, he found his four kittens poking around in his clothes. He put those clothes on them just for fun and took some photos. This was the beginning of Name-neko cats (^^). Name-neko cats sing a song, too. Let’s see their music video!

Name-neko was a really big hit. But only a few years later people began to suspect that the cats were abused, and soon the Name-neko fever subsided. Actually, the cats were not abused because special techniques were used for photo shooting. The main character, Matakichi, lived for 16 years, and his girl friend, Mikeko, lived to be 24 years old!