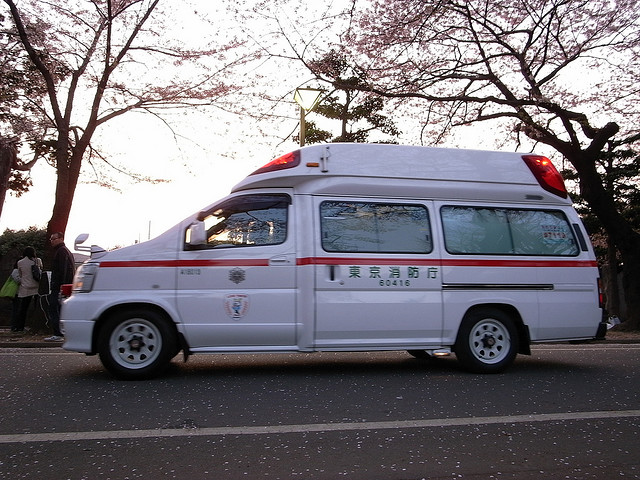 Have you ever called an ambulance? And in what situation did you call?

Recently in Japan, the number of ambulance calls has been increasing. But why? Are more people getting sick or injured than before?

The answer is “no”. In reality, people are calling ambulances for non-emergency reasons. Yes, people call an ambulances TOO easily. I’ve heard that some people call an ambulance just to go to a hospital, like using a taxi. This kind of impudent action creates the possibility of ambulances not being able to help people who actually need immediate treatment. To solve this issue, the Fire and Disaster Management Agency has made a set of guidelines for ambulance service. In this guide, some improper situations for ambulance call-outs are identified…

・ A paper cut on the finger, which has stopped bleeding…

・ The medicine the patient received at hospital has run out…

・ Scheduled to go into hospital today, so wanted a lift…

・ Had called a home helper who did not come, so called an ambulance…

・ Didnʼt want to wait long at hospital, so called an ambulance

They are really unbelievable but all true situations that have happened. We should recognize the proper situations for when we need to call an ambulance, and for when we don’t :/

Three foreign language versions (English, Chinese and Korean) are also available, so I would like to share the links.